HOW HIGH-RISES CAN MOVE TOWARD ZERO WASTE 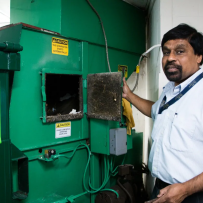 Multi-residential buildings often have pitiful rates of recycling and composting. For example, in Toronto, high-rise residents divert an average of 27 per cent of their waste from the landfill — less than half the 65 per cent diversion rate for people who live in houses.

But getting most of the way to zero waste is possible for high-rise dwellers, as Toronto’s Mayfair on the Green has shown.

The condo building in the Malvern neighbourhood in the city’s east end has more than 1,000 residents across 282 units, but manages to divert 85 per cent of its waste to recycling and composting, saving $15,000 a year in waste fees. It now puts out just one dumpster full of garbage a month, down from 20 a month in 2008.

About three years ago, this caught the attention of the Toronto Environmental Alliance (TEA), a local group focused on sustainability.

“We said, ‘Wow, this is amazing,'” said Emily Alfred, TEA’s waste campaigner. “What are they doing that makes them so successful?”

Often, the biggest challenge for multi-residential buildings is that many were designed before recycling and organics collection existed. Consequently, they make it more convenient to throw out garbage — down a chute just steps away from your unit — than to recycle or compost, which typically requires a trip down the elevator to the basement, garage or even outside across a parking lot. (Plus, in many parts of Canada, organics composting often isn’t available at all.)

Because waste disposal is generally handled by building staff, residents are often unaware of how much disposal costs and don’t understand the impact of putting waste in the wrong bin, Alfred said.

Mayfair on the Green solved these problems by:

Alfred said that high-rises also have some features that can facilitate waste diversion, such as common spaces that can be used to collect and sort different kinds of waste and house donation bins.

They also have property managers and maintenance staff who can help set up waste rooms, track waste and come up with innovative solutions. One key to Mayfair on the Green’s success was its superintendent, Princely Soundranayagam, who did all of those things.

Finally, they’re communities where residents can share ideas and some of the work involved. That, Alfred said, “can be really powerful in terms of creating a zero waste culture in a building and helping it move forward.”

TEA has spent three years working with Mayfair on the Green, as well as 10 other high-rises and University of Toronto geography professor Virginia MacLaren to learn how to replicate this success in other buildings. TEA is inviting other buildings to take part in the next phase of its Zero Waste High-Rise Project, which launched this week.

The group will help participants evaluate their building, develop a plan and report on their progress. It will also provide inspiration in the form of success stories and learning events.

While the program itself is focused on Toronto, Alfred said many of the group’s lessons and resources are universal, and high-rise residents in other cities across Canada are welcome to try them out.