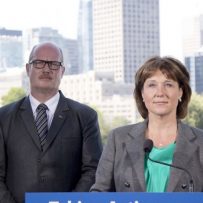 B.C. Premier Christy Clark has stripped the Real Estate Council of B.C. of the privilege of self-regulation and a report by the council-appointed Independent Advisory Group (IAG) points to a lack of clout and culture as two main reasons the system failed.

The controversy started with stories in The Globe and Mail reporting on shadow-flipping, Realtors allowing foreign buyers to use their addresses to avoid taxes and an agency urging homeowners to low-ball their house price to expedite a sale. The stories claimed Realtors were failing to protect client interests and the council was not regulating real estate agents.

The day after the IAG issued a 64-page report on how to improve the council, Premier Christy Clark nixed industry self-regulation, claiming it didn’t work. She said a newly structured Office of the Superintendent of Real Estate Brokers would implement the report’s 28 recommendations.

But the IAG report points to a critical shortfall. It found that the council was “significantly limited” in its ability to apply financial penalties under the powers granted by government when it received self-regulation rights in 2005.

“These are outside of the council’s control because they are set by government. The Real Estate Council has been asking for several years to have these penalties and sanctions increased and for government to enable them to have more discretion and flexibility to apply them, but few changes have been made,” the IAG report said.

Vancouver Island Realtor Marty Douglas, who once served as council chair, says government inactivity played a role in the situation. “The government has to acknowledge itself for some of the blame,” he says. “The council had been asking for amendment to increase penalties for more than two years.”

“The general public and many people in the industry no longer view the penalties and sanctions administered by the Real Estate Council as credible,” says the IAG report. “This problem is compounded by the fact that the commissions in real estate services have steadily increased along with the price of housing. Large commissions and low penalties for licensee misconduct combine to create the perception that regulatory penalties are simply a transaction cost for otherwise profitable behaviours. This significantly undermines the effectiveness and credibility of the regulator and the regulatory regime.”

Douglas adds, “I think we in the industry recognized that there were some shortfalls” with action needed. But he says the situation did not call for the sledge-hammer action of removing self-regulation and a installing a new real estate regulator. Douglas says the actions were a political move. Clark moves into an election in 2017 and has been heavily criticized by David Eby, the NDP housing critic.

British Columbia Real Estate Association (BCREA) president Deanna Horn says, “Our livelihoods depend on our reputations and I know that almost every Realtor in the province will be happy to see stronger penalties and enforcement for rule-breakers.”

A total of 28 recommendations are provided by the IAG report, focused on four key areas: transparency in contract assignments and providing incentive and commission information to clients; the perception that the council was administrating with a “light hand” and penalties are not severe enough to serve as a deterrent; education requirements that made it too easy for unscrupulous entrants; and too many industry and association organizations that confused the public.

The IAG also urged the government to amend the Real Estate Services Act so that licensees found guilty of misconduct could be forced by the council to disgorge any ill-gotten gains. These could be used to compensate victims short-changed in real estate actions.

The report also points out that compliance is fractured under the current system. The current Superintendent of Real Estate Brokers, whose office is part of the Financial Institutions Commission, handles unlicensed sales individuals, while the council handled licensed individuals. The provinces’ real estate boards also disciplined their members on codes of conduct.

“Over time, however, the overlapping functions of the boards and the Real Estate Council have resulted in contradictions and confusions,” the report says, adding that “both consumer and licensees are confused about who has responsibility to regulate misconduct and deal with consumer complaints.” The report says that misconduct will go unreported to the regulator and “equally concerning is the closed nature of the boards’ discipline process.”

The IAG report says that a proposal to consolidate the B.C. real estate boards provide an opportunity to address the overlap and confusion. “A decision by the boards to exit all quasi-regulatory functions that impact the consumer and leave those functions to the Real Estate Council would be the right thing to do for industry and for consumers,” the report says.

Dan Morrison, president of Greater Vancouver Real Estate Board, says his board welcomes the opportunity to work with a dedicated superintendent of real estate brokers who would handle consumer complaints.

“It doesn’t bother us we won’t be getting those calls,” he says. However, he doesn’t see the board giving up its rights to discipline members who violate the board’s code of conduct. “We were always over and above what the council did,” he says.

The IAG recommendations regarding transparency call for Realtors to disclose incentives and commissions, refrain from dual agency agreements and use standard forms approved by a regulator. They must ensure the client is kept appraised of offers and contract assignments cannot occur without the seller’s approval. All funds derived by the practice go to the seller.

Any licensee that has an invested interest in a transaction should clear it with a managing broker.  The IAG report recommends that rules also be amended to prohibit a licensee from acquiring an interest, by contract of purchase and sale or by an assignment of the contract, in a transaction for which the licensee is the designated agent.

Tougher scrutiny of new industry entrants is needed, the report says, including checking their backgrounds and whether they had problems in their previous field of employment. Education should be continued and enhanced, says the report.

While it is still unknown what role the council will take in the future, the IAG report originally urged it to take over the Superintendent of Real Estate Brokers’ duties. Clark reversed this recommendation and established a new dedicated government office.

There also emerges a question of whether the council really was truly self-regulating, a term that not only implies a regulating body but whose members self-regulate. An e-blast from the council to Realtors emphasized this before the final report was issued: “You also have a responsibility to act in the public interest – and that means reporting the misconduct of other licensees whenever you become aware of it. Licensees are uniquely positioned to identify potential misconduct and prevent harm to consumers by sharing their concerns with their managing brokers and ensuring matters are brought to the attention of the council.”

The IAG report paints a different picture.  “Each member of a self-regulating industry needs to be part of the compliance regime and report misconduct promptly. The IAG found this culture is lacking in the real estate industry and that more needs to be done to reinforce the obligation for licensees to report misconduct.”

The council also relied heavily on complaints to identify licensee misconduct, the report found, and urged that “more proactive investigation is needed” looking not just at broker financial statements but transactions and how they were carried out. The IAG report also recommends a whistle-blowing line.

With self-regulation removed, the recommendations still place considerable onus on the broker/manager to monitor and report misconduct of licensees and licensees to report managers.

The IAG recommends that managing brokers be required to file an annual report that includes information on the number of files involving actual or potential misconduct that were handled and how they were resolved.

It also recommends formal information-sharing agreements with the boards that currently do not share information regarding public complaints and discipline actions with the regulator.  The report recommends that non-compliance with the requirement to report misconduct to the council constitutes professional misconduct that may be sanctioned.

“I don’t blame the government for acting, this is an unfortunate thing that is happening in the industry,” says Mike Nugent, president of the Victoria Real Estate Board “I would have liked to see the council receive the extra powers that they needed. I believe that there are some very competent people at the council. I hope the new office is able to utilize them.”

Nugent says there needs to be some clarification of recommendations within the report, such as the elimination of dual agency agreements. In smaller towns where brokers are limited, it may be difficult to implement, he says.  As well, the structure of brokerages is changing and there are more licensees under the scope of one managing broker, which will make monitoring difficult, he says.

Douglas says the industry is still in the dark regarding how the new office will operate. Even at the council there is little information as the handing over of duties begins. A spokesperson for the council’s office says, “An implementation team is being put together and will include staff of the Superintendent of Real Estate’s Office (at the Financial Institution Commission), the Real Estate Council and the Ministry of Finance.”

There was no information available on what role the council would play after the new office is established.