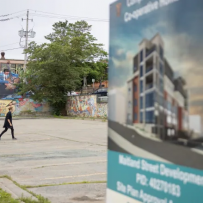 Nova Scotia’s premier-designate said Monday he remains committed to removing rent control put in place by the Liberal government after the province’s state of emergency is lifted, though it’s unclear when that will be.

Speaking at a COVID-19 briefing, Tim Houston reiterated his position from the provincial election campaign, saying a Progressive Conservative government will put an end to the annual rent increase cap of two per cent.

“I don’t see a scenario with extending that, that’s not something that I’ve been focused on. I feel very sincerely that the solution to the housing crisis is more housing stock,” Houston told reporters.

“For anyone who says that rent control is a solution to the housing crisis in this province, it’s not. It’s disingenuous to say that.”

In the face of a housing crisis, the Liberals brought in measures last November that included rent control until Feb. 1, 2022, or whenever the COVID-19 state of emergency is lifted.

Houston said the state of emergency will end sometime after Nova Scotia enters the fifth and final phase of its COVID-19 reopening plan, tentatively scheduled for Sept. 15. He said he will work with Public Health on a timeline.

The NDP was the only major party to promise continued rent control during the election.

The PC election platform outlined a plan to sell or lease public land for developers to build on, with the caveat that a portion has to be affordable housing.

Rent control not the solution: Houston

Houston, whose Progressive Conservatives won a majority government in last week’s election, said rent control may be a deterrent to a long-term solution to the crisis because it could discourage people who want to build new units.

He said he’s gotten calls from people who’ve lost their homes after landlords stopped renting because of rent control.

“We don’t want to do something in the interim that gets us away from achieving the goal that we need to achieve,” he said.

Stephen Smith of Dartmouth lives in a duplex with his girlfriend and two daughters. While he hasn’t been handed a rental increase, he’s very aware that could soon change — and put them out on the street.

Even with two incomes, Smith said his family is scraping by while having to pay $1,000 a month in rent.

He said there’s “just no way” he’d be able to afford an apartment on his own, even with making around $52,000 a year in the construction industry.

Smith doesn’t agree with Houston’s point that rent control prevents developers from building housing stock. He said there are more construction cranes around the city than perhaps ever before, with apartments and condo buildings going up constantly, even with rent control in place for nearly a year.

Hotel rooms as an option

Houston said he’s heard lots of suggestions about how to help people that could be priced out of their homes before new housing stock is added, including using hotel rooms for people with nowhere to go.

Street outreach navigators working with people experiencing homelessness have said there are almost no hotel rooms available, but they should open up once tourists leave in the fall and winter. Meanwhile, advocates and social workers have said that hotel rooms are not the answer for people with mental health and addictions issues.

Last week, violence erupted in downtown Halifax after the municipality moved to tear down shelters and encampments in parks and on municipal property. Police in riot gear and body armour deployed pepper spray at one point while protesters hurled objects at officers.

Houston said he’s spoken to Mayor Mike Savage about how the situation got to that point, and further talks are planned.

The premier-designate also said the province is working to get to the root causes of why homeless encampments have increased in Halifax in the past few years, like lack of affordable housing.

Houston and his cabinet are set to be sworn into office Aug. 31. Houston said Monday he and one of his ministers will meet with the Nova Scotia Affordable Housing Commission right away.