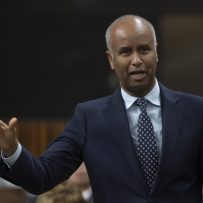 Housing Minister Ahmed Hussen on Monday responded to questions criticizing his record on tackling unaffordable housing in Canada by accusing the opposition of “misinformation and disinformation.”

Opposition critics from both the NDP and Conservatives pressed Hussen during question period in the House of Commons over the continued skyrocketing prices of homes in Canada.

In particular, the NDP questioned the government over the role of domestic real estate investors speculating in the market, while several of the Conservatives focused on the impact unaffordable home prices are having on Millennials.

“It’s really difficult to deal with misinformation and disinformation and talking down our housing market every single day from that side of the House,” Hussen said in response from a question from Conservative MP Melissa Lantsman.

A government official told Global News that Hussen meant to say that critics were talking down the government’s investments in the housing market.

Hussen referenced past comments by Lantsman, who represents the Toronto-area riding of Thornhill, suggesting the government’s housing programs were not getting affordable homes built in her region.

Lantsman’s question on Monday, however, did not include the comments the minister cited. It focused on the effect of high housing prices on younger Canadians. She asserted the government’s policies like creating a new tax-free savings account will only help those who can afford to put away extra money.

“Millennials were told that if they got a bunch of degrees, a skilled trade, a good job, they’d have no problem owning a home. Yet they still live in their parents’ basement. The government’s signature housing promise to solve this (is) a new savings account, but you need $8,000 a year in savings to use it,” Lantsman said.

“The more they do, the worse it gets. When will the minister actually help anybody in this country buy a home?”

Hussen is one of the dozens of members of Parliament who own rental or investment property: one-third of Liberal cabinet ministers do so, and at least 20 per cent of all MPs.

However, they have not yet received any formal complaints requesting an investigation.

As the cost of living soars and home prices continue to sizzle, the government’s vow to crack down on foreign investors with a two-year ban has faced criticisms for not also targeting domestic speculators.

In an interview with The West Block guest host David Akin on April 24, Mike Moffat of the University of Ottawa’s Smart Prosperity Institute said the focus on speculation by foreign buyers ignores the fact that domestic speculation is part of the problem, too.

“The ugly part is some of the measures that they talk about as speculation, it gets a little bit into blaming foreigners for our issues where, there’s a lot of domestic speculation that’s going on,” he said.

The federal Liberals made housing unaffordability a central plank in their 2021 campaign platform and in the months since, have touted the promises made in the campaign and the recent budget that they say will help to ease the crunch.

Those measures include banning most foreign buyers for two years and imposing higher taxes on people who flip properties within 12 months of buying them — part of growing efforts to target the financialization of the Canadian housing market.

Financialization is a term increasingly being used in reference to investors buying up real estate — typically residential real estate that could otherwise serve as starter homes or affordable rental units — and then treating those as financial assets to generate profit, either through resale or raising rents.

“It is time to stop treating housing as a stock market,” she said.

Hussen responded by saying the government agrees “we need to tackle speculation.”

But he has so far offered little explanation for why the government is not pursuing measures used in other countries like Singapore or New Zealand with overheated housing markets: taxing investment properties at a higher rate, or requiring higher down payments for them.

The government official suggested further measures are on the table but that the government is focusing on the initial measures proposed so far to weigh their impact on the market.