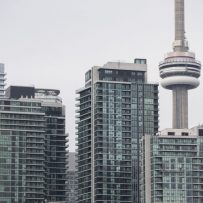 The Toronto Region Board of Trade says 42 per cent of young professionals would consider moving to a more affordable housing market.

If the Toronto region is going to attract and retain top talent, the province needs to fix the area’s housing shortage, in part by revising its recently expanded rent controls, says the Toronto Region Board of Trade.

An Environics email survey for the Toronto Region Board of Trade last summer found 83 per cent of 803 young professionals, aged 18 to 39, were struggling to save for retirement due to high housing prices. The same survey shows 42 per cent of young professionals would consider leaving the region because of the high cost of housing.

That has prompted the board to publish a Housing Policy Playbook in advance of the June provincial election with five recommendations for how the next government should tackle the housing crunch. The proposals range from building condos over transit stations to expediting construction permits.

“This is just a critical part of enabling the economy. It’s about creating a sufficient supply of housing for our community,” said board CEO Jan De Silva.

“We know we’ve got growth coming into the city, we know there’s going to be another 1.2 million people moving in over the next decade, and our current path is taking us nowhere near the housing that we are going to need to accommodate that many new residents, let alone the shortfalls we have today,” she said.

If high-earning young professionals are struggling, the implications are dire for lower-paid workers, whose contributions are also needed, added De Silva.

New university grads, still making starter wages, are paying “horrific” prices for substandard rentals. Young couples may be able to squeeze one child into a one-bedroom-plus-den condo but, once that second child comes along, they need more space, she said.

An Environics email survey for the board last summer found 83 per cent of 803 young professionals, aged 18 to 39, were struggling to save for retirement due to high housing prices. Sixty-five per cent said it was impacting their ability to pay down debt.

The board’s recommendations note that Toronto is suffering a vacancy rate of less than 1 per cent — a 16 year low — and a 74 per cent drop over the last decade in the number of single-family homes available for purchase in the region.

It also includes a chart showing that Toronto is 22nd on a list of 29 global cities ranked for their housing affordability. Among them are 14 other cities that are being considered for an Amazon world headquarters. Only one of those, Los Angeles, ranks lower on the 14th Annual Demographia International Housing Affordability Survey, published by the Winnipeg-based Frontier Centre for Public Policy last year.

“We’ve had young professional staff who have chosen to live in another part of Canada because they didn’t see any pathway by staying here in Toronto in the workforce to be able to have housing and be able to raise a family and save for retirement (and) pay off student loans,” said De Silva.

To loosen the region’s tight housing supply the board is recommending:

While rent control is well intended, it discourages investors like pension funds from financing purpose-built rentals because the return on their investment is too low, said De Silva. The board isn’t suggesting rent controls be eliminated but rather revised so rents could be raised by 5 per cent rather than this year’s cap of less than 2 per cent.

A February study by online rental hub Padmapper shows a one-bedroom apartment goes for $2,100 on average in Toronto and the Toronto Real Estate Board reported that the average home price in the region, across all housing categories from condos to detached houses, was $736,783 last month. That compares to a national average of $481,000.