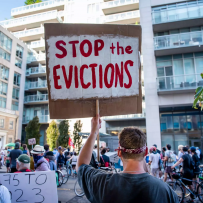 Ontario is once again in a state of emergency and under a stay-at-home order amid surging rates of COVID-19, and that means a residential eviction ban is now also in effect.

Premier Doug Ford announced the new public health measures Wednesday and said this would also result in the eviction ban being reinstated, though he didn’t initially provide details on what exactly the moratorium would entail.

The first time the province introduced a stay-at-home order, back in January, an eviction enforcement ban was implemented and sheriffs could not actively enforce evictions for a period of 28 days.

But the virtual eviction hearings that had been taking place at record speed at the Landlord Tenant Board were allowed to continue despite the ban, and it appears this time around is no different.

According to the latest rental evictions moratorium order, the ban once again only applies to enforcement, meaning landlords can still seek eviction orders, virtual eviction hearings at the LTB will still be held and tenants will presumably be removed from their homes as soon as the moratorium is lifted.

“No person shall attend at a residential premises for the purpose of enforcing any of the following: 1. An order evicting a tenant under the Residential Tenancies Act, 2006. 2.  A writ of possession issued  by the Superior Court of Justice removing a person from their place of residence,” reads the order, which came into effect on April 8 at 12:01 a.m.

In “urgent situations,” such as for illegal activity, a judge can order that the sheriff expedite the process and eviction enforcement can proceed.

And while this ban will prevent down-and-out tenants from being evicted into homelessness for the next month, it will likely do little to appease the organizers and advocates who’ve long been calling for a complete eviction moratorium for the duration of the pandemic and rent relief/forgiveness for arrears accumulated during COVID-19.

Story by: Blog TO