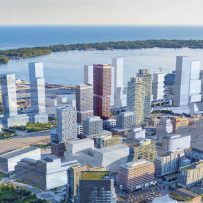 The next stage of redevelopment in Toronto’s mixed-use West Don Lands community could see a pair of Henning Larsen Architects-designed towers anchor a slice of land abutting the Wilson GO Train rail yard to the south. Materials submitted in support of Official Plan and Zoning Bylaw Amendment applications respecting Block 20 in the West Don Lands, municipally known as 125R Mill Street, have now been posted by the City.

The development is being pursued by WDL 20 LP, a partnership between developers Dream Unlimited, Kilmer Group, and Tricon Capital Group. The team has entered into a 99-year land lease with Infrastructure Ontario, an agreement which stipulates a minimum of 30 percent affordable rental housing within the residential component of the proposed project. The terms also require the development to target LEED Gold certification.

Currently in use as a surface parking lot, Block 20 is located to the east of Cherry Street and the streetcar loop, south of Mill Street, west of Block 32, and north of the rail corridor. The property is positioned immediately south of Block 8, another multi-building scheme being spearheaded by the same trio of developers.

An early plan for the property proposed a parking structure and district energy facility, with a small portion of the site dedicated to residential and live/work uses. The in-force zoning bylaw permits these uses, including residential, office and retail programs, so long as they are distanced 30 metres from the rail corridor.

The plans have now changed in the wake of new proposed rail safety measures, which would involve the construction of a crash wall as an alternative to the 30-metre separation requirement to expand the development potential of the site. The revised proposal eliminates the district energy facility and envisions much higher densities and a broader mix of uses to maximize the value of the property. Denmark-based Henning Larsen is the design architect on the project with Toronto firm architectsAlliance serving as the architect of record.

The applications seek permission to build two residential towers, of 32 and 45 storeys or 119 and 162.61 metres. A total of 661 rentals, including 198 affordable units, are proposed across 54,455 m² of residential space. Residents will have access to 2,013 m² of indoor amenities and 1,927 m² of outdoor amenity space provided on the seventh floor. A 387 m² ‘Skylounge’ wraps the mechanical penthouse of the taller west tower as the signature interior feature.

A six-storey podium would contain 23,872 m² of office space and 481 m² of at-grade retail uses. The project would mark the first major office development in the West Don Lands area. Block 20 would also become the third development in the West Don Lands to deliver affordable rental housing. A total of 682 affordable rental units are planned between the proposals for Block 8, Blocks 3, 4 and 7, and Block 20.

To reduce shadowing on streets and neighbouring buildings, the towers are situated on the western side of the site, and step back 3.5 metres to the south. The massing employs a horizontal shift in the tower volumes, with lower and upper components imagined. This arrangement increases the tower separation distance, which measures 25 metres from the seventh to 15 storeys, 27 metres from the 15th to 24th storeys, and 29 metres above the 25th storey. The west tower maintains a 742 m² floor plate throughout both volumes, while the east tower’s 757 m² lower half slightly exceeds the Tall Building Guidelines’ 750 m² maximum. The upper half however sports a reduced 743 m² floor plate.

The development proposes a publicly accessible urban plaza and pathway, dubbed East Tankhouse Lane, that extends from Cherry Street and the streetcar loop to the planned public road on Block 32 and beyond. The route would connect to planned walkwys between Block 8 to link the site north to Mill Street. Combined with the portion approved as part of the Block 8 development, this privately-owned publicly accessible space (POPS) delivers a total of 4,975 m² of active space to the area, double the size identified under the West Don Lands Precinct Plan and Block Plan. The public realm along Cherry Street and East Tankhouse Lane is expected to be animated with retail uses and lobby access.

With construction having already begun on Block 8, the rail crash barrier wall planned for Block 20 is scheduled to be built prior to Block 8’s completion. Parking would be shared between the two developments in an underground garage totaling 306 spaces. An additional 38 spaces would be provided off-site. Bicycle parking would be provided on the mezzanine level of the project, with a total of 784 spots proposed.