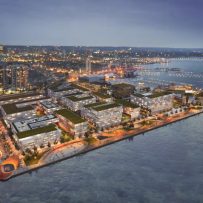 With partnerships and a “small moves, big results” approach, UrbanCapital, Milborne, and Core Urban have teamed up to create a proposal for redevelopment of Hamilton’s Pier 8, one of four now shortlisted as finalists to win a commission to create a landmark community at the west end of Lake Ontario. Collaborating with Saucier + Perrotte, RAW Design, and Public Work, the plan draws inspiration from Hamilton’s natural surroundings and its industrial roots. Partnerships with the Hamilton Public Library, YWCA, local retailers, and established restauranteurs provide the character for what Pier 8 could potentially become.

A statement from the aspiring development team reads “our proposal for Pier 8 is not based on one big idea. It’s based on lots of small, smart moves that will make Pier 8 one of the most vibrant, diverse and beautiful communities in the world.” The ideas incorporate a diverse mix of commercial spaces with affordable housing, rentals, and condo units, come together to create the plan. The influenced of Hamilton’s waterfront and its natural landscape in conjunction with outlined partnerships offers tangibility to the proposal. 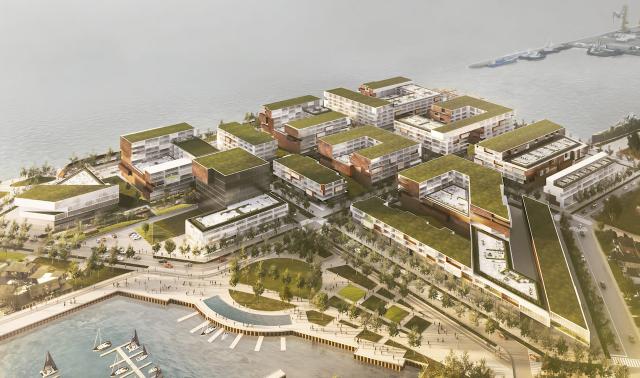 Blocks 1 and 8 are allocated as rental buildings, with block 2 solely as a condo structure. Blocks 3 through 7 are to be built as mixed-use residential condo buildings, with blocks 5 and 7 to hold space for affordable housing in partnership with Indwell. Block 6 contains an Alt Hotel, while other the commercial partners including The Other Bird restaurant, Equal Parts Hospitality, and Momentum Fitness are set to occupy spaces throughout the community. An urban grocer, retail, pop-up and live/work spaces are also spread throughout. Block 16 is for a new branch of the Hamilton Public Library shared with a YWCA recreational space.

The two main elements for the design include a network of north-south ‘green slips’ that carve and extend into the blocks, and a carved-out built form that echoes the formations of the Niagara Escarpment. Inspired by the Harbour’s industrial slips, the green network draws visitors and residents from the land outward to the water. Built forms layer the neighbourhood, creating ‘dynamic structures’ with a ‘weathered and polished’ aesthetic. The balance between natural inspiration and historic harbour help to create an “intimate and inspiring vibrant community.”