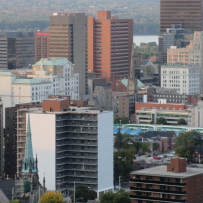 The director of a charity that procures affordable homes in the Hamilton says he’s not surprised a new study has put the city third on a list of 25 North American cities with the least affordable housing.

Graham Cubitt, director of projects and development at Indwell, says the news is “shocking” but “sadly not surprising.”

“As Hamiltonians we like to think of ourselves as an affordable city, but everybody knows that we actually are not nearly affordable enough anymore for most people who live here,” Cubitt said.

“And it’s happened so quickly that I think it’s reshaping our own thinking of ourselves.”

Oxford Economics North America Housing Affordability Indices (HAIs), which measures home prices relative to a median household income, says Hamilton’s index checked in at 1.5 in the first quarter 2021 report, ahead of the country’s average of 1.34.

The indicator puts Hamilton on par with Toronto, which checked in at number two on the list at 1.53. Vancouver was number one in North America at 1.67.

The three Canadian locations beat out all U.S. cities including Los Angeles and New York, which had indices of 1.40 and 1.00, respectively.

“Hamilton and Ottawa have joined the ranks of Canada’s least affordable metros, while homes in the Prairies and Quebec remain within reach of local households,” the study said.

Quebec City was the most affordable in Canada with an index of 0.64, just behind Chicago (0.60) and Columbus (0.62) for all of North America.

The Canadian prairies also faired better with Calgary’s index at 0.78, Edmonton at 0.67 and Winnipeg with 0.68

Both Cubitt and the study say the issue is simply a result of demand outstripping supply in the big cities.

The supply-demand imbalances pushed prices to historic highs in both the United States and Canada, even as incomes have rebounded since the start of the pandemic, according to the Oxford report.

The study revealed that in the U.S., a near-record of new homes already sold are still awaiting construction.

Cubitt says in the GTHA, many rental units are being converted back into family homes and new housing is being more directed towards condos, since the cost of construction is high.

“There’s no way to actually rent a new apartment or a new condo out for less than $1,500 (in Hamilton) to cover costs, ” said Cubitt.

“We are in a very complex time of prices going up on every front because of the cost of construction and a reduction in supply.”