Hamilton developments mix the old with the new 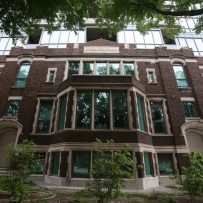 Character is the name of the game when it comes to downtown residential and commercial developments in Hamilton.

When Steve Kulakowsky and his partner David Sauve bought the old McIlwraith Public School for $750,000 in 2011, they wouldn’t put their condo sales centre on the site.

“We weren’t sure if anybody would actually want to live in that area,” said Kulakowsky.

But the 36-unit Witton Lofts was just ahead of the curve as the first condo built north of Hamilton’s Barton St., near the waterfront. The buyers, who took occupancy in 2013, paid about $300 per sq. ft. Today, the condos fetch about $450 per sq. ft.

A fusion of old and new, the Witton’s original three-storey exterior still features the charming 1925 reliefs of children reading. The upper floors float above the school on steel posts.

Core Urban is now developing two heritage buildings and a new build on what’s becoming the city’s restaurant row on King William St. There will be 25 residential units above and three restaurants at street level.

The new Pasadena on Bold St. will incorporate heritage staircases, fixtures and fireplaces. A patio on the new roof — the original was destroyed by a fire two years ago — offers a view to Bratch’s dining hotspot Radius and the Hunter St. GO station.

“This was a grand city,” he said. The Pasadena “will make magnificent space.”

He’s already got two more buildings in his portfolio for development.

“Most Hamiltonians will have a memory of the place,” said Ted Valeri, of the Royal Connaught, a storied Hamilton landmark that is being redeveloped by his company Valery Homes in partnership with Spallacci Homes.

Located between two GO stations, the three-phased project will include underground parking, a rooftop garden and piazza with cafes.

A piece of the original stone facade has been dismantled and stored to form part of the final exterior.

“We’re hands-on and we’re excited because there’s a huge market in Hamilton for condos,” said Rudi Spallacci, adding that there is a waiting list for Phase II of the project.

“We did our homework and we liked what was going on. There’s been a void for 30 years,” he said.

“You can find cheaper space but you won’t find comparable space,” says Colliers International representative Paul Mariutti, who is in charge of leasing the Right House, Hamilton’s first department store.

When prospective tenants couldn’t visualize the potential of the five available floors with 13,000 to 15,000 sq. ft. each, the owners, Aragon Properties, poured $400,000 into a brick and beam renovation that includes pale wood floors and white-pine clad posts.

At $25.50 per sq. ft., it’s still less than half the cost of comparable space in Toronto, but there aren’t a lot of companies looking for that size of space, said Mariutti

He’s convinced, however, that, “It’s just a matter of time,” with the city’s office vacancy rate down to 14 per cent from 19 per cent in recent years.

“We’ve had a lot of people come here but nothing’s happened yet,” he said.

This membership-based work and event space in the old Hamilton Spectator building is now one of the city’s entrepeneurial hubs.

A long hallway off the street and a hop upstairs opens onto a common cafe-style lobby where individuals tap away on laptops and small groups gather.

Common area access at the young, airy CoMotion starts at $100. Offices range from $600 to $2,000. There’s a receptionist, board rooms and professional development workshops.

Rebecca Kallsen, 26, runs her communications company, Kallsen + Stennett, from a dedicated desk between two rows of offices for $240 a month. She assumed that she would work in Toronto, but instead hung up her own shingle in her hometown.

There are great coffee shops, restaurants and an arts scene. An LRT is coming and there’s an extensive bike share system, attractive to young workers who are less likely to own cars.

“It’s very supportive starting a business in that kind of community,” said Kallsen.