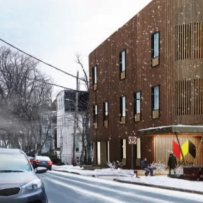 Halifax regional council unanimously endorsed amendments Thursday night to planning rules that will allow the construction of a housing development for Indigenous people that will include an emergency shelter and permanent housing in Halifax’s south end.

The Diamond Bailey House will have 32 emergency beds on the main floor, 11 bedrooms with shared washroom facilities on the second floor and 10 bachelor units on the third floor.

The development will be built on College Street.

Pamela Glode Desrochers, the executive director of the Mi’kmaw Native Friendship Centre, which is building the facility and will operate the programs, made a presentation at Tuesday’s public hearing.

“This is a unique partnership,” she said. “It’s the only project in Canada that includes all levels of government.”

The Friendship Centre plans to offer 40 different culturally appropriate programs and has contacted Dalhousie University to help it set up a wellness centre.

Raven Davis, who is Indigenous and has lived on the streets, spoke in favour of the project.

“Being homeless is like no other experience, I wish it on nobody,” said Davis. “This not just about getting people off the streets … it’s a place where people can seek a communal sense of belonging.”

One area resident did raise some concerns.

“Our area is heavily populated with senior citizens and there are two nearby schools,” said Lucien Toomey. “Our primary concern is safety, theirs and ours.”

The councillor for the area, Waye Mason, pointed out the site used to have a halfway house operated by Corrections Canada.

“I think this is going to be better,” he said. “This facility is going to be run by some of the most respectful and compassionate people in our community.”

The new shelter has to be substantially completed by the end of 2021 in order to get federal funding through the Rapid Housing Initiative.