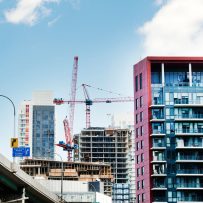 At the end of 2019, the number of purpose-built rentals under construction in the GTA reached 12,367 units — the highest level since the 1970s when modern rent controls were enacted. The number of rentals that started construction in 2019 totaled 4,172 units, declining from the 25-year high of 5,620 units that started in 2018. However, rental starts remained higher than completions, which grew to 3,630 units — also the highest level since the early 1990s, allowing the inventory of future units underway to continue rising last year.

Furthermore, a total of 17,082 new purpose-built rental apartment units were submitted for development approvals during 2019 in the GTA, rising 43% over the 11,939 units that were submitted in 2018. This growth followed the removal of rent controls for newly built units in Ontario that was introduced in November 2018. As of the end of 2019, a total of 57,197 new purpose-built rentals were proposed for development but had not yet started construction, rising from 44,086 units at the end of 2018 and reaching the highest level tracked by Urbanation over the last five years. Combined, the total number of new rentals in the GTA that were either under construction or proposed for development reached 69,564 units, which was 4.5 times more than the total number of rentals built in the GTA since 2005 (15,305 units).

Among the 71 purpose-built rental buildings completed in the GTA since 2005, the average surveyed rent for available units in Q4-2019 was $2,491 per month, which was based on an average unit size of 751 sf and typically excludes most utility costs and parking costs, with the latter averaging $137 monthly for the GTA. On a same-building basis (i.e. excluding new completions), average monthly per square foot rents increased by 5.3% year-over-year in Q4-2019, slowing from the 8.2% annual rate recorded in Q4-2018.

By the end of 2019, the new rental apartments that reached completion last year were 70% leased. Rents for available units in these new buildings averaged $2,658 per month during the fourth quarter — 6.7% higher than the market average surveyed.

The vacancy rate surveyed within rental buildings in the GTA completed since 2005 (excluding projects still in their initial lease-up period) continued to edge higher during 2019, reaching 1.0% in the fourth quarter, which was up from 0.8% in Q4-2018 and a record low of only 0.1% in Q4-2017. 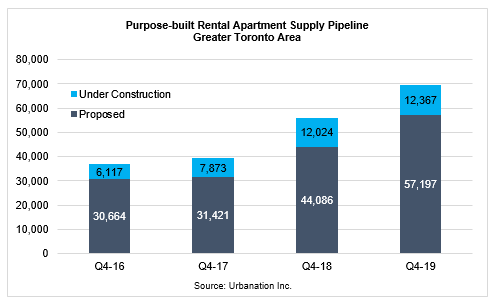 “2019 may be remembered as an important year in the history of the GTA rental market, as the progress made towards increasing supply could mark the beginning of a new era for rental housing development in the region. But it’s critical that this momentum continues in the years to come in order to eventually bring the market into balance”