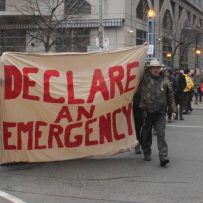 Toronto’s new emergency shelters are being built to evolve, according to the city division in charge of expanding the system.

“We are designing with housing in mind,” said Mary-Anne Bédard, general manager of shelter, support and housing administration, speaking before economic and community development committee at city hall on Tuesday.

“We are building shelters that are focused on room sizes and configurations that can be easily and without a lot more investment (be converted to) independent support units in the future.”

Bédard was updating the committee on a 2018 directive from city council to expedite the creation of 1,000 new beds in the emergency system, a motion first rejected by city council and Mayor John Tory in December 2017, but was reopened by Tory after a brutal cold snap in early 2018.

The city has secured the properties for 78 per cent of those spaces, Bédard said, and 740 are expected to open by the end of this year. All new builds and renovations will be done with future conversion in mind, she told the committee, and the division has applied for a grant through the National Housing Strategy for potential funding.

“I can’t stress this enough,” Bédard said. “The answer to homelessness is not more shelter beds.”

The city’s shelter division has been directed to consult with the city’s housing and finance divisions and report back to the committee on the staffing and budgetary changes the city would require to end chronic homelessness.

Bedard’s presentation came the same day a group of housing advocates and supporters marched to city hall and delivered a petition with at least 25,000 signatures to a member of the mayor’s staff outlining demands that Tory declare homelessness an emergency and create 2,000 new emergency beds.

The silent march followed an outdoor service at the Church of the Holy Trinity where the number of names listed on the Toronto Homeless Memorial officially passed 1,000. The list of 1,002 names was pulled together through both word of mouth and city statistics, dating back to 1985, and are inaccurate and fall short of the number of people who have actually died, according to those who monitor the list and keep track of names.

One of the names added was E. States, who was interviewed and photographed by the Star in 2017 during an overnight spent at Sistering, a drop-in centre for women, and who organizers said died on Dec. 15, 2019.

On that 2017 overnight visit, States arrived in the early morning hours having just, she said, taken a young, critically ill drug user to the emergency room. Once inside she went right to work acting as either mother or sheriff to any woman who needed her, either offering comfort and advice or breaking up fights.

States was a poet and mother of six. Between keeping an eye on women in the drop-in she took a few moments to share with the Star her past struggles with drugs and alcohol, what it had taken to remain sober for two months, and her desire to become a peer harm-reduction worker. Another hope was to find someone to love.

“If I could turn back the hands of time I wouldn’t change nothing, just take one day at a time,” she said.

On Tuesday, the mayor’s spokesperson, Don Peat, in an emailed statement said Tory and council “absolutely recognize that homelessness in Toronto is an ongoing critical and emergency issue,” pointing to the addition of 3,000 new emergency spots since 2015, as well as 24-7 respite sites. He also highlighted the need for more provincial and federal support, saying Toronto cannot shoulder this growing problem alone.

“We recognize that longer term solutions will come from substantial new investment in areas such as supportive housing which we know cannot be undertaken with property taxes alone or by the City on its own,” Peat wrote.

“We have heard from homelessness advocates and appreciate their ongoing efforts to highlight this issue and we encourage them to assist us in making the case for further investment in this area to the other governments.”