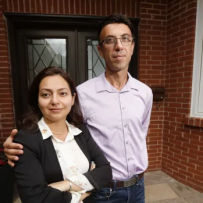 Nearly a dozen landlords in the Greater Toronto Area are struggling, or have struggled, to evict the same tenant from their single-family homes after he turned each of their properties into an illegal rooming house for up to 20 people — and stopped paying rent.

The tenant, Arif Adnan Syed, is facing 11 fraud-related charges for allegedly using fake identification documents in his applications to rent houses in Richmond Hill and Markham.

None of the allegations have been proven in court.

Those criminal charges, and evidence that Syed has rented out at least 11 homes as rooming houses — which are illegal, according to the cities’ bylaws — have done nothing to help the landlords evict Syed.

“The police are only following up with the fraud and the fraudulent documents,” said Mandana Jafarian, one of the landlords. “They cannot evict [Syed] from the illegal houses that he is renting and making money.”

The police and municipalities can say that a law has been broken, but can’t evict the tenant. Meanwhile, the Landlord Tenant Board (LTB) can evict the tenant, but the landlords say adjudicators refuse to hear or consider evidence of the criminal charges, or other cases with the tenant, because they don’t directly relate to that eviction application.

Landlords such as Jafarian and her husband, Kambiz Farsian, say that needs to change.

“I don’t know why there is no way to stop this type of business,” Farsian told CBC News.

The Richmond Hill couple said they did their due diligence before renting out their four-bedroom house to Syed at the height of the COVID-19 pandemic in April. Jafarian and Farsian reviewed all of Syed’s supporting documents and Googled him to check for past issues.

The problem was that the documentation provided to the pair identified Syed as “Arif Saied.”

“He changed his name and that’s why he tricked us,” said Farsian. “We couldn’t find any history for him anywhere.”

A Google search of Syed’s real name would have revealed a history of fraud-related charges.

The Markham man was charged with fraud in 2010 when Toronto police said they had busted an allegedly fraudulent moving company. Those charges were later withdrawn.

Syed is also facing a combined 38 charges from Ontario’s vehicle sales regulator for allegedly selling vehicles with rolled back odometers. The charges, which were laid last year, are still before the courts.

Syed originally agreed to a phone interview for this story, but later told CBC News in an email that he could not comment because he has related matters before the courts.

Although in the email, Syed went on to say that although he has evidence to prove the allegations are wrong, he just can’t talk about it.

Within a week of Syed’s gaining occupancy of the house, Farsian and Jafarian said they started receiving calls from neighbours asking if they were using the property for short-term rentals.

And that’s when they discovered several rooms in their house listed for rent on Kijiji.

“It was unbelievable, just unbelievable how fast they did it,” said Jafarian. “This is his business.… He has experience doing this.”

The couple said Syed only paid first and last month’s rent, and then his other rent cheques bounced even though, they say, he was making about $10,000 a month by using their home as a rooming house.

Farsian and Jafarian are among a group of at least six landlords whose cases led to criminal charges against Syed by York Regional Police in June, according to court documents.

CBC News has confirmed that at least five other landlords are also trying to evict Syed after he started renting their homes and using them as rooming houses.

The Richmond Hill couple consider themselves lucky, because they were finally able to evict Syed in July after going through the LTB a second time.

In the end, it came down to fire code violations that put the occupants at risk.

Farsian and Jafarian received a fire inspection order in May with the fire code violations, then in June the LTB terminated the tenancy.

“The Tenant does not live in the complex and is oblivious to the enormous risk he has created in his quest for illegal profits,” wrote the adjudicator in the decision. “The Landlords should not have to incur enormous costs to turn the complex into a rooming house. They never intended to own a rooming house.”

Syed still refused to get the rooming house occupants out of the house, so the landlords had to go to Ontario Superior Court to get an order enforcing the eviction.

When they finally got everyone out last month, the couple said, their house was trashed.

“Someone decided to change the walk-in closet to a birdhouse,” Jafarian told CBC News. “It was full of broken eggs, eggs thrown on the walls, full of this material that you keep the birds with.”

In total, Jafarian said she and her husband have spent $16,700 repairing the damage done to their house and replacing appliances she said were stolen before the eviction was enforced.

The LTB has ordered Syed to pay the couple more than $12,000 for rent and repairs. And the Ontario Superior Court decision ordered Syed to cover Farsian and Jafarian’s $9,000 worth of legal fees.

Most of Syed’s other landlords are still trying to evict him.

John Davies started renting his house in Thornhill to Syed in June 2019.

The Markham landlord has been to the LTB twice to try to evict Syed and said both times his case was thrown out because of a technicality — for example, Davies emailed a form he was supposed to send by registered mail or deliver in person.

“The bureaucratic details trumped any discussion about the illegal use of the house,” said Davies. “The fact that he had other houses … it was stated very clear up front that this could not be part of our argument.”

Davies told CBC News Syed hasn’t paid rent since November, so as of this month he’s owed $26,400 in arrears. He also says a builder gave him a $46,600 estimate to repair all of the damage that’s been done to the house.

The landlord’s latest LTB case was dismissed earlier this month.

“We’re back at Square 1 again,” he said. “There’s such a backlog that we may be waiting for another six months before we can get a hearing.”

‘There should be another mechanism’

A former Ontario Rental Housing Tribunal adjudicator and paralegal told CBC News cases like those involving a tenant like Syed shouldn’t be going to the LTB in the first place.

For Davies, his case has become about more than just getting the rent he’s owed and shutting down the illegal rooming house.

“It’s the fact that [Syed] knows that he can basically do anything he likes,” Davies told CBC News.

“When landlords go to the LTB individually they have almost no capacity to bring the whole story … and he gets away with it every time.”