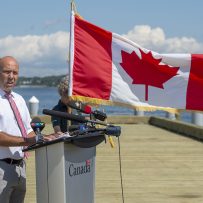 Every Canadian deserves a safe and affordable place to call home. That is why the Governments of Canada and Nova Scotia are providing additional support to hundreds of low-income households across the province.

Today, Andy Fillmore, Member of Parliament for Halifax, on behalf of the Honourable Ahmed Hussen, Minister of Families, Children and Social Development and Minister responsible for Canada Mortgage and Housing Corporation (CMHC), along with the Honourable Chuck Porter, Minister of Municipal Affairs and Housing for Nova Scotia, announced that Nova Scotia households will receive the new Canada-Nova Scotia Targeted Housing Benefit this year. This includes about 1,700 new eligible renter and homeowner applicants and about 1,000 eligible households who will be transitioned to the new program when their existing rent supplement expires.

For a total of $120 million dollars, the federal government and province are each providing $60 million dollars over eight years for this program. In the first year, about 2,700 households are expected to be assisted through federal and provincial funding under the new program, which gives individuals, seniors, and families direct help to stay in their own home.

“The Government of Canada is committed to ensuring that every Canadian has a safe and affordable place to call home. Long-term, predictable funding for housing has been needed for more than a decade. Today, with the Government of Nova Scotia, we have taken a significant step toward our goal of building strong communities where Nova Scotian families can prosper and thrive, now and for the future.” – Andy Fillmore, Member of Parliament for Halifax

“We know that housing costs are rising and too many people are struggling to keep a roof over their head. No one should have to live with that level of fear and uncertainty, and this new program will directly help more eligible individuals, families and seniors stay in the place they call home.” – Chuck Porter, Municipal Affairs and Housing Minister of Nova Scotia