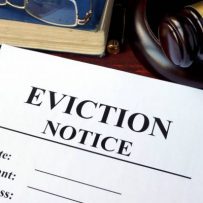 The provincial ban on evictions for COVID-19 ends next week

The province’s moratorium on evictions during COVID-19 is set to expire next week.

The Investment Property Owners Association of Nova Scotia says eviction notices would be justified at that time.

That’s according to Kevin Russell, the Executive Director of the Association.

He says over the last 3 months, landlords have worked out about 330 rent deferral agreements with tenants, and over that same period, more than 2,300 tenants did not pay their rent.

Russell says that equals approximately $12.5 million in losses for landlords in the province.

He tells The Sheldon MacLeod Show landlords would be in the right to file eviction notices for non-payment of rent, but the process to be evicted can take between two to eight months – time that can be used for tenants to make payment arrangements with their landlords.

“We never want to see anybody on the street. Our business is keeping people housed in long term tenancies. You know the process for residential tenancies, we’re obligated to serve a notice, and that just starts the process,” says Russell.

Meanwhile, the Nova Scotia NDP are calling on the governing Liberals to extend the ban on evictions for non-payment of rent due to COVID-19.

As the expiry date for the provincial moratorium on evictions nears, the NDP and Nova Scotia ACORN are calling on the provincial government to extend the ban on evictions, freeze rent increases and take a “fresh look at rent control” during the COVID-19 pandemic.

The province’s eviction ban is in effect until June 30.

Just days away from when the ban is set to be lifted, Nova Scotia ACORN is urging the provincial government to “step up” and stop what it estimates are between 3,000 to 6,000 tenants who are “in rent debt that are going to be served notices to quit next week” from potentially getting evicted.

ACORN, the Association of Community Organizations for Reform Now, is an independent national organization of low- and moderate-income families with 130,000 members across the country.

“We are asking for a full ban on evictions due to rental arrears because of COVID-19 related financial hardships and, along with that, a repayment program through the Residential Tenancies Board,” said Mila McKay from Nova Scotia ACORN.

“We’re also asking for a provincial rent grant program to help low-income tenants pay back rental arrears due to COVID-19.”

McKay, who has been in and out of homelessness for the last five years, said they are “really concerned” for June 30 to roll around and are calling for these actions before or once the provincial ban on evictions is lifted “to ensure those evictions don’t happen” and more people are not forced on to the streets or into crowded shelters.

“We can see instead of mass evictions and thousands of people losing a human need, housing, people getting opportunities to stay in their homes and maintain their rent,” McKay added.

NDP housing spokeswoman Lisa Roberts said the party wants “to see some sort of support from the government so that we are avoiding evictions,” whether it be rent banks or support for rental arrears payback plans, among other options introduced elsewhere in Canada.

The NDP is also calling for a freeze on rent increases, Roberts said, as many Nova Scotians have been served notices of “significant rent increases” both just before and during the province’s state of emergency.

“What we know is there are many Nova Scotians who are in the midst of great economic uncertainty. Not everyone has been able to go back to work, there’s been limited childcare options made available,” she said.

“Even if the cases are down, the economic impacts of COVID-19 are still hitting Nova Scotia really hard. And the last thing that we want to see is people be put out of their homes because they owe back rent to their landlords through no fault of their own.”

Roberts added the NDP wants the provincial government to “take a fresh look at rent control,” by re-establishing rent control in Nova Scotia, as well as to “get serious about actually getting back into the housing game.”

“We’ve had during this Liberal government fewer than 200 units of affordable housing added to the market in Nova Scotia and we know that just in Halifax we’ve lost many affordable units … in the last 10 years,” she said. Earlier this year it was reported by the Canadian Mortage and Housing Corporation that Halifax had a one per cent vacancy rate.

“So we’re sort of actively still losing affordable housing and the government has not been showing the leadership that it needs to show in order to make our housing market reflect the needs of all tenants.”

The Chronicle Herald requested an interview with a provincial government official, but it was declined. Instead, Department of Municipal Affairs and Housing spokeswoman Krista Higdon said in an email the deadline for the province’s eviction moratorium continues to be June 30.

“If this should change, we will inform both tenants and landlords. It’s important to reiterate, tenants still need to pay their rent. We appreciate that this continues to be a difficult and challenging time for many,” said Higdon.

“The change we introduced means tenants who need it, have time to access federal and provincial financial aid programs so they can have the money they need to ensure they can meet their rent payment commitment to their landlord.”