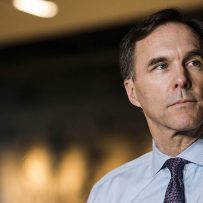 After a year of challenges and controversy, Finance Minister Bill Morneau is gearing up to deliver his third budget.

Morneau has come under fire in the last year over his handling of small business tax changes, and running deficits amid major economic uncertainties like NAFTA – issues Bay Street hopes the finance minister will address when he delivers the budget on Tuesday.

As the day approaches, business leaders and money managers have shared their budget wish lists with BNN. Here’s some of what they’ve had to say:

“We want to see Canada continue to be competitive in the global marketplace. So we’re looking for fiscal policy that will enable that, whether that be balanced budgets or tax policy that remains competitive on a global stage. We also want to see training and money for youth — for education — so that the Canadian youth today can be adding to the economy and the future, and be trained for the jobs of the future.”

“I think it’s ludicrous what’s going on with Bill Morneau. We have no idea what’s going to happen with small businesses and holding corporations. … I think we need to be more tax competitive and so I’d like to see more language about that. ”

“I always like to see where there are improvements from the perspective of the consumer – and basically allowing them to have more disposable income, so we can continue to grow [our] business.”

“I would absolutely like to see more leadership on Canadian energy exports. And whether it’s pushing through a lot of the local opposition of British Columbia, to pipeline expansion, or considering supporting pipelines going both east and south. I just think that Canada has really missed an opportunity here on exporting our hydrocarbons.”

“Anything we can do around childcare and around making it a little bit easier with flexible work environments, with you know, dads – or the other partner –  able to spend more time off is generally all very good. And I think we are going to see a bunch of that stuff come up.”

“I think what investors want to see is that finances are tied to a very specific plan over a reasonable period of time. I think the minister hit the right tone when talked about concern about indebtedness. I think we’re all concerned about public debt, and the growth of public debt, particularly in an environment of great uncertainty and increasing uncertainty about Canada’s growth. That, to me, would be the number-one priority.”

“I’d love to be optimistic … but to be honest with you, I’m not expecting a whole heck of a lot. …We’ve made a decision as a society to extract resources in Canada – that’s very important to our whole country, yet we haven’t gone as far as building the infrastructure to optimize the price on a global scale of selling those resources. … And I’d love to hear plans and things in the budget in terms of how we’re going to go about solving that problem and optimizing our resource prices.”

“I think what the federal government’s missing, is how big of an opportunity Nunavut and the Canadian North is in terms of investing in infrastructure, to make it easier to develop the richness of resources there. And we see it every day. We’ve said this before: the federal government campaigned on the north, Indigenous People, and infrastructure. We haven’t really seen a lot [of action].”