FREELAND VOWS MORE ACTION ON HOUSING IF NEEDED. WHAT HAVE THE FEDS DONE SO FAR? 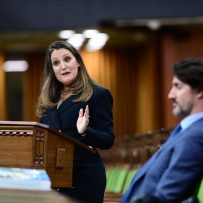 The federal government is prepared to take “additional action if necessary” to help with housing affordability, Finance Minister Chrystia Freeland said on Friday.

“This is a market where conditions are changing and we are watching the situation very very closely, and prepared to take additional action if necessary.”

Her comment comes months after the Liberal government promised to spend more than $10 billion over the next five years on housing affordability — but affordable housing remains out of reach for many.

The average selling price of a home in Canada has surged more than 50 per cent between February 2020 and February 2022, according to Reuters, which cited data from the Canadian Real Estate Association (CREA).

That reality is hitting home for Canadians, according to one study.

The study conducted last month by Chartered Professional Accountants of Canada (CPA Canada) found that half of Canadians who don’t own homes think home ownership remains far out of reach — despite prices cooling slightly across the country.

Nearly 90 per cent of respondents said they view rising interest rates as the greatest hurdle to getting into the housing market as borrowing costs rise.

At the same time, as a result of interest rate hikes, the housing market is starting to cool.

June home sales were down 24 per cent year over year, the CREA said last month, following a trend that has seen housing activity slow drastically since April after the central bank began hiking its key interest rate in March.

Meanwhile, the average home price declined 1.9 per cent month over month in June — but was still up 14.9 per cent from the same time last year.

The development has, however, put pressure on renters. The rental market continues to swell amid demand from those opting not to buy due to rising inflation.

The average rent for all Canadian properties was $1,885 monthly in June, according to Rentals.ca, an increase of 9.5 per cent annually.

What have the Liberals done for housing affordability so far?

The Liberal government has made a number of promises aimed at tackling the housing affordability issue. Here’s where those pledges stand.

The 2022 budget outlined plans to create a new Tax-Free First Home Savings Account (TFFHSA) to help Canadians struggling to get into the housing market save for the cost of a down payment.

While the government is forging ahead with its plan to create the new savings account, the new tool won’t be available until next year, according to the government.

The budget also proposed doubling the First-Time Home Buyers’ Tax Credit to $10,000, retroactive to any homes purchased after Jan. 1, 2022 — however, the government’s webpage still only lists a $5,000 credit, suggesting this change hasn’t yet taken effect.

The government has promised to build about 400,000 homes annually for the next decade to help increase housing supply, a move advocates say is a key part of the housing affordability equation.

Construction has failed to keep up with the country’s growing population — in fact, a report published by Scotiabank last year found Canada has the “lowest number of housing units per 1,000 residents of any G7 country.”

However, it is not clear there are enough workers to build them.

About 286,000 new homes are currently built each year, according to 2021 data from the Canada Mortgage and Housing Corporation (CMHC).

“It’s not even clear that you’d be able to increase the (construction) pace significantly, given how challenging a labour and a material situation is facing the industry … right now,” Jean-François Perrault, chief economist at Scotiabank, said in an interview with Global News in April.

In the months since that interview, the labour shortage has continued to plague the construction industry. According to figures released by Statistics Canada in June, recruiting skilled employees continues to be an obstacle for just shy of 50 per cent of construction businesses.

The government has promised to both explore a Home Buyer’s Bill of Rights and set aside funds for a one-time $500 payment for “those facing housing affordability challenges.”

When it comes to that payment, however, details remain murky. When the budget was unveiled in April, the government said the specifics and delivery method for this support would be announced “at a later date.” So far, there has been no announcement.

As for the Bill of Rights for home buyers, the budget merely laid out plans to look into such a document — nothing concrete was included at the time, nor has such an exploration since emerged.