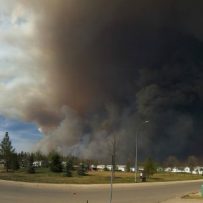 Most of Fort McMurray’s commercial, industrial and multifamily real estate was outside the fire zone and unscathed when the city’s population emptied out under a compulsory evacuation order earlier this week. Yet, few people would have contemplated staying any longer given the limited escape options.

“It’s a town of one airport, one rail line, one highway and one bridge that’s really just a tiny dot in the middle of the boreal forest,” explains Ken Williamson, senior vice president, national investment services, with Colliers International.

He and his colleague, Carl Pedersen, were actually among the thousands fleeing along Highway 63 on Tuesday evening — relieved to be telling the story from their Edmonton office on Wednesday.

“It went from being a calm, spectacularly beautiful day at 10 in the morning to becoming a real crisis two hours later to, by mid-afternoon, being out of control,” Williamson recalls. “We saw areas that were devastated and burning in front of us.”

All this rather dramatically shifts landlords’ focus from the market challenges they’ve faced over the past two years of Alberta’s economic slump to more immediate concerns about the well-being of their tenants and staff and the security of their assets. Williamson estimates there is nearly $2 billion worth of commercial and industrial real estate in the city, primarily located downtown and in major industrial parks to the northeast of ravaged residential neighbourhoods.

With no one but firefighters now on the ground, Fort McMurray landlords can only wait for news from afar. Boardwalk Rental Communities, which owns and manages nine multifamily buildings in the city, issued a May 4 statement announcing that all tenants were believed to be safely evacuated “based on the information available” but was unable to supply news on the status of their vacated homes.

“Once it is safe to do, Boardwalk has a team prepared to immediately assess damages and ensure the safe return of its resident members to their communities,” the company affirms. Tenants have been promised a $1,500 cash reimbursement of May’s rent and, if necessary, opportunities to move into other Boardwalk buildings.

RioCan’s 135,000-square-foot Timberea Landing shopping centre — one of few forays REITs have made into the city’s retail sector — is located in the Timberlea community, one of the most populous residential areas with more than 30,000 residents.

“We are monitoring the situation,” RioCan’s chief executive officer, Edward Sonshine, said in a May 4 interview on BNN. “Just as a citizen, it is shocking to me to see a fairly significant city evacuated.”

Fort McMurray’s remote and currently perilous location is, of course, the basis for its existence. The service centre to Alberta’s oil sands almost doubled its population, gaining 40,000 residents within its urban boundary in the first 15 years of the millennium. This rapid growth has also perhaps contributed to the vulnerability of some districts on the edges.

“The configuration of the town does not make it easy to adapt to the inherent risk of wildfire,” observes Alexander Hay, an engineer specializing in security and protection of critical infrastructure, who has been advising the Building Owners and Managers Association (BOMA) of Toronto on how the commercial real estate industry could better plan, prepare contingencies and collaborate to improve resiliency to extreme events.

It’s assumed Fort McMurray’s urban population has dropped somewhat below a 2015 tally of 83,000 as a repercussion of prolonged low oil and gas prices and associated job losses, but market analysts project that the majority of employed evacuees will return when they can.

“The industry is not going anywhere. The jobs will be there. The city will get rebuilt,” Williamson asserts.

Ironically, it looks like economic downturn has opened up some strategic swing space needed for recovery. Canada Mortgage and Housing Corporation’s (CMHC) most recent rental housing survey in the fall of 2015 recorded an availability rate of 34.5 per cent in the city’s private multifamily apartment stock, equating to about 1,065 units. Williamson suggests the rental vacancy rate is now closer to 50 per cent, and most of the apartment buildings are located in the downtown and north part of the city, where fire had not penetrated as of Thursday evening.

“The fact that it is there for them is a big benefit for displaced people,” he says.

Recovery also presents an opportunity to apply knowledge gained in the response to and the fallout from the crisis. However, experts in the field caution against drawing any conclusions while dire events are still unfolding. Rather, lessons are learned once there is time to examine and assess strong and weak performances, whether those be infrastructure stamina, crisis response capabilities or human conduct.

“The insurers will be extremely keen to find out what happened and how it happened,” Hay advises. “To do that, you have to unpick the systemic issues. You’re not recovering to where you were before; you’re recovering to a higher standard.”