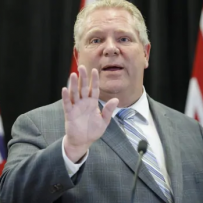 The Ford government has voted against an NDP bill that would have extended the temporary ban on evictions until one year after the pandemic is declared over by the chief medical officer of health.

The province moved to temporarily ban evictions while the stay-at-home order came into effect on Jan. 14.

As some regions moved out of the emergency order on Tuesday, and Toronto, Peel  and York Regions are expected to move out on Feb. 22, critics argue that thousands of people could potentially be out on the street in a matter of a week, if they can’t pay rent.

NDP critics argue that preventing evictions during the pandemic is not only the right thing to do, but also a matter of public health.

“I’m calling on the Ford government to vote in support on this bill,” she said prior to the vote. “It is not safe for folks to find shelter or to couch surf with friends and family in the middle of a pandemic.”

Cole Webber, a community legal worker with Parkdale Community Services, says tenants need to be protected, especially during this time, and governments at all levels need to do more.

“Tenants have been clear that what is needed is rent-forgiveness,” says Webber. “What we’ve seen in reality is landlords have filed thousands of evictions.”

The Landlord and Tenant Board (LTB) continued to hear eviction applications and issue orders, but the enforcement of eviction orders was postponed during the emergency order, except in urgent situations – such as for illegal activity. This includes orders issued, but not carried out, before the emergency order came into effect.

CityNews reached out to the LTB for data surrounding online hearings. The LTB said that it usually requires two to three days for data-gathering and that our deadline on Wednesday could not be met, however they will compile the data in the coming days and provide it to CityNews as it becomes available.

As for the province, Minister of Municipal Affairs and Housing Steve Clark said that the province has done everything they can to support tenants during the pandemic, including working with municipal partners to make sure tenants are housed. But, the federal government needs to step in and offer help as well.

“It’s a situation we’ll continue to monitor,” said Clark. “Since the pandemic, our government has delivered more money to municipalities than ever before, but our government is being shorted by $490-million that I believe the feds owe Ontario.”

Webber added that while the bill proposed by the NDP to extend an eviction moratorium is needed, it does little to solve the crisis many tenants face long-term.

The latest pause on residential evictions was the second time the province enacted such measures.

Evictions were previously suspended last spring until August after the Landlord and Tenant Board worked through a backlog of cases that predated the pandemic and grew in 2020 as more people lost income.