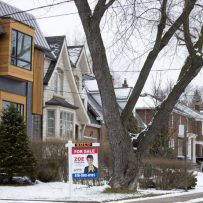 The B.C. government implemented a 15-per-cent tax on property purchases in Metro Vancouver by buyers who aren’t citizens or permanent residents. Then, in January, B.C. Premier Christie Clark announced the tax would be lifted for those who have a work permit, in order to encourage more people to come to the province to work.

The number of sales in Metro Vancouver plunged in the wake of the new tax, but the market appears to have bounced back since. Sales leapt forward in the last month and prices climbed 12.3 per cent year-over-year to nearly $1.2 million in the first three months of 2017, according to a report from Royal LePage released Tuesday.

The most recent possibility floated by the Ontario government is a “non-resident speculation tax,” but the province hasn’t yet said how exactly that tax would work.

Josh Gordon, an assistant professor at Simon Fraser University who studies the housing markets in Ontario and British Columbia, said one way to tax “non-resident speculation” would be to levy a foreign buyers tax but refund or offset it according to income tax paid in the province.

That way, foreigners coming to Ontario in order to work aren’t penalized, he said. Only people who have no connection to the local labour market would pay.

Sousa has made it clear he wants to increase the taxes that some real estate speculators or, as he calls them, “property scalpers,” pay.

He has said speculators are reselling contracts for pre-construction homes multiple times before closing, using assignment clauses. However, Sousa hasn’t said exactly how he’ll make them pay more in tax.

Sousa said he wants the federal government to close a “loophole” that allows so-called property scalpers to treat their profits as capital gains, which means only 50 per cent is taxable. However, his efforts to get Federal Finance Minister Bill Morneau to include capital gains changes in the federal budget were unsuccessful — and Morneau signalled Tuesday no such changes are coming.

According to Gordon, another way of taxing speculation is to tax real estate sales when the seller has only owned the property for a short amount of time, with the highest rates for those who’ve owned the home less than six months. That kind of tax would discourage speculation and make it more expensive to “flip” homes, he said.

Gordon has suggested the province could implement a progressive property surtax, which would be an annual surtax that only applies to homes appraised over a certain value. It would be refunded, or offset, according to income tax paid by the property owners, he said.

That means the progressive property surtax would apply to people who own an expensive home and speculators who own multiple expensive homes, but pay little-to-no income tax in Ontario, whether that’s because they’re foreign nationals or have otherwise avoided or evaded taxes, he said. Seniors who had paid into the Canada Pension Plan for five to 10 working years would be exempt.

According to one example provided by Gordon, the surtax could be 1 per cent on the first $1 million above an initial threshold of $800,000, rising to 2 or 3 per cent thereafter.

Toronto Mayor John Tory has floated the possibility of a vacant home tax modelled after Vancouver’s, which came into effect this year.

Vancouver’s empty homes tax is 1 per cent of the value of the property and it applies to homes that aren’t being used as a principal residence or aren’t rented out for at least six months of the year. There are exemptions for homes that are under construction or were sold during the year, as well as condo units in buildings that prohibit renting.

Owners must make a declaration about whether their property was vacant in 2017 by February 2018.

The City of Vancouver says those declarations will be subject to a “rigorous audit process” and owners who make a false declaration will be fined $10,000 per day plus payment of the tax. The city says the goal of the tax is boosting housing affordability and opening up more rental units.