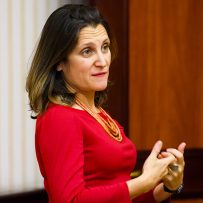 Canadian Finance Minister Chrystia Freeland on Friday defended the central bank as inflation spikes to a three-decade high and the frontrunner to take over the opposition Conservative Party pledges to fire the Bank of Canada governor if elected.
“It is clear to us all that we are living through a period of global volatility. We have COVID. We have the Russian invasion of Ukraine. We have China’s zero-COVID policy,” Freeland told reporters by teleconference from Munich, Germany after a G7 meeting.

“In this environment, responsible political leadership means reinforcing for Canadians, and for the world, our government’s very clear commitment to the independence of the Bank of Canada and our confidence in the Bank of Canada.”

Pierre Poilievre, who leads in all polls ahead of a September vote to elect a new Conservative leader, has said he would turf Bank of Canada Governor Tiff Macklem “to get inflation under control” if he becomes prime minister.

Inflation inched up to 6.8 per cent in April, with food price growth hitting a four-decade high, upping the pressure on the central bank to hike interest rates quickly to avoid an inflationary spiral.

Separately, Canada said on Friday it was imposing additional sanctions on Russian oligarchs and banning trade in certain luxury goods with Russia in response to Moscow’s invasion of Ukraine.

Freeland also told reporters the G7 had broadly discussed “further strengthening” sanctions against Russia, including the question of an oil and gas embargo.

“We absolutely recognize that the economic challenge of an oil and gas embargo is much greater for our European partners,” she said, adding the group had discussed ways Canada could support Europe on energy security.