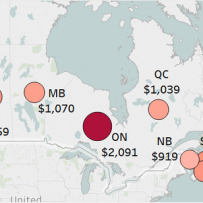 In January, the average property on Rentals.ca was listed for rent at $1,854 per month in Canada overall, the median rent was $1,747 per month. It should also be noted that properties listed for above $5,000 a month and below $500 a month are eliminated from the sample of units analyzed. Also, short-term, single-room and furnished rental units are eliminated from the sample where identifiable.

The chart below shows average rent levels in Canada by the property’s built form and the number of bedrooms. The most expensive properties are condominium apartments, with landlords asking $2,693 per month on average for two-bedroom units, compared to $2,561 per month for a single-detached or semi-detached house. Condos are more expensive to rent than houses overall in Canada because the bulk of the condo listings on Rentals.ca are in the high-priced Greater Toronto Area, compared to numerous single-family listings in cheaper markets across the country.

On a municipal basis, Toronto had the highest one-bedroom rents in Canada at $2,149 per month in January, an increase of 0.6% from a month earlier (see opening infographic). A number of GTA suburban markets were among the most expensive cities for rents in Canada, with one-bedroom units going for $2,050 per month on average in Thornhill, $2,042 in Vaughan (includes Woodbridge and Concord), and $1,999 in Oakville.

The chart below shows monthly rental rates for Toronto apartments only, as Toronto is particularly skewed upward by leased apartments. When isolating just rental apartments, Vancouver has the highest rent at $2,000 per month. The shading of the bars indicates the average number of bedrooms in the sample of listings, and Vancouver’s is just 1.2 bedrooms. Toronto had the second highest rents at $1,983 per month (this is the former City of Toronto, prior to amalgamation), with the average listing having 1.5 bedrooms. The former City of Etobicoke has an average rent of $1,837 per month, with the average listing having 1.8 bedrooms.

To further break down the rental apartment data, the chart below shows the median rental rates by bedroom type for the top municipalities in Canada.

Vancouver has the highest rents across the board, but the sample size of transactions is much smaller than Toronto, which can lead to monthly volatility.

One of the most active municipalities on Rentals.ca listings for Canada is Edmonton. The chart below presents four different heat maps by Postal Code in Edmonton, Fort Saskatchewan, Leduc, Spruce Grove, and St. Albert.

The map in the northwest corner shows average rental rates, and no distinct pattern emerges. As a reminder, the data includes all housing types, so you’re more likely to see smaller Edmonton rental apartments closer to downtown and more single-family product in the suburbs.

The map in the southwest corner shows the average size by postal code. Many of the areas closer to the downtown core have average unit sizes under 900 square feet, while the suburban markets tend to range from 900 square feet to 1,200 square feet on average.

The southeast corner map shows that pageviews are the highest in Postal Code T5K, which includes the Oliver and Rossdale communities in south downtown.

The chart below shows that rental rates have been increasing over the past four months in the combined area of Edmonton, Fort Saskatchewan, Leduc, Spruce Grove and St. Albert from $1,207 per month to $1,255 per month. Despite the 2% increase in asking rents month over month, the rent on a per-square-foot basis declined from $1.57 per square foot in December 2018 to $1.55 per square foot in January 2019.

In Winnipeg Almost all of the Rentals.ca listings are Winnipeg apartments. The vacancy rate in Winnipeg has been 3% or lower for 20 years, and rental rates have increased by 2% or more for 19 consecutive years (per Canada Mortgage and Housing Corporation data). Developers have taken notice, building about 1,400 rental apartments in each of the last three years, the highest levels of annual rental apartment construction over the past 30 years.

Despite the consistent rental increases, rates are still very affordable in relation to other Canadian cities. The chart below shows the location of Rentals.ca listings in January in Winnipeg.

The chart below looks at the average rent in Winnipeg for rental apartments only over the last four months. The results have been nearly identical, ranging from a low of $1,102 per month in November 2018 to a high of $1,131 in December 2018. The median rents have ranged from $1,045 to $1,075 per month.

There have been about 10,000 apartments completed over the last five months in the GTA (condo and rental tenures), and this increase in supply may be keeping rents stable.

The chart also shows the 75th percentile, to get a sense of what the more prime locations are commanding. This figure has remained fairly stable over the last four months at about $4.00 per square foot. The 90th percentile was $4.50 per square foot in January 2019, down from the fourth quarter. It is likely that condo rental rates are increasing because of fewer low-priced rentals as opposed to more high-priced rentals.

Rental rates across all Rentals.ca listings in Canada increased in January, with the median rental rate reaching $1,747 per month, an increase of nearly 6% month over month (see chart below). The Canadian Real Estate Association is reporting resale home transactions were down significantly last year, but the recent jobs report indicates employment growth is relatively solid, while immigration numbers remain high. This suggests that there will continue to be upward pressure on rental household formation and further increases in rental rates in Canada if credit availability remains tight but other economic data remains generally positive.

The new mortgage stress test implemented in 2018 in Canada has resulted in much slower mortgage growth and slow or declining house prices in several Canadian markets. However, affordability has not significantly improved for ownership housing, and rental affordability has gotten worse. Several industry groups and western Canada-based politicians are pushing for a change in the stress test to assist first-time buyers’ entry into the market. This could impact the rental market in 2019 if mortgage credit availability is increased.