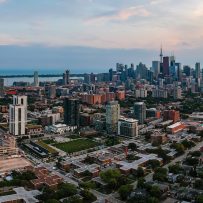 An “ethical alternative” to Airbnb is preparing to launch its first North American operations in downtown Toronto.

Fairbnb Canada, a co-operative short-term rental platform, announced on Thursday that they have received financial support from the Canada Mortgage and Housing Corporation (CMHC) to make their North American debut. The platform strictly limits rentals to spaces in hosts’ principal residences, whether that be a spare room or their entire home while travelling.

“Our platform co-operative will initially be launched in downtown Toronto, Canada and 50% of all booking fees will go straight to the [Kensington Market Community Land Trust (KMCLT)] to protect and expand affordable housing,” said Thorben Wieditz, director of Fairbnb Canada. “The idea being to use tools formerly contributing to the commodification of housing to help de-commodify housing.”

The KMCLT shared their appreciation for the partnership with Fairbnb, and the potential to protect affordable housing in an increasingly unaffordable city.

“It’s a novel approach,” said Chiyi Tam, development manager with the KMCLT. “Allowing actual home-sharing, while benefiting the land trust movement is an innovative approach towards alleviating hardship in the housing market. The Kensington Market community has long suffered from ghost hotels and has thus been a Fairbnb Canada supporter for years.”

Weidtz says that Fairbnb, which initially began with operations in European cities, decided to expand into North America “out of necessity.”

“After spending years regulating Silicon Valley-based platforms that undermine our housing markets, building an ethical alternative to these corporations seemed the right thing to do, Weidtz said.

The company plans to scale their operations across other major urban centres to support the local economy and affordable housing through further partnerships with local land trusts.

“Knowing that our idea which started in Europe is now growing and starting to flourish in Canada is a not just a great achievement for our platform, but also proof that people want to see tourism changing for the better,” said Emanuele dal Carlo, president of Fairbnb Co-Op.