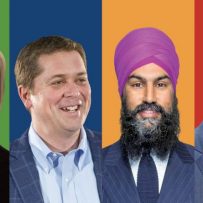 The Liberals, NDP and the Green Party have released their platforms. The information below is based on those platforms, and on the Conservatives’ platform plank releases and past actions while in power. More promises may be made by the Conservatives when they release their election platform. Updates will be posted on the CFAA website as more promises are released.

The NDP would take things further by introducing a “Super Wealth” tax of 1% on wealth of over $20M, and by increasing the top tax bracket from 33% to 35%.

The NDP would increase the general corporate tax rate from 15% to 18%. The Greens promise to raise it to 21%.

The Liberals, Conservatives and NDP will all introduce measures to promote home ownership. The Greens promise to reduce the emphasis on home-ownership and promote renting.

The Greens would restore tax incentives for purpose-built housing and would remove the “deemed” HST when a developer places vacant condo units on the rental market. They would also bolster support for the cooperative housing sector, add funding to the Canada Housing Benefit and adopt a guaranteed livable income.

The Liberals promise to tackle the effects of foreign ownership in the housing market by introducing a 1% annual vacancy tax on foreign-owned vacant units, while the NDP would apply a one-time 15% foreign buyers tax on non-citizens and non-permanent residents.

The Conservatives have yet to introduce their platform but plan to work to reduce red tape at the provincial level and may well reduce the federal role in housing.

Only the Conservatives promise to cancel the current carbon tax backstop, and instead promise to limit the emissions of large emitters.

Both the NDP and the Greens have ambitious goals to aggressively reduce Canada’s emissions through changes to infrastructure.

As part of their plan, the Greens would mandate energy retrofits for all buildings by 2030. The details of their plan are not clear.