ELECTION: How the parties’ housing promises stack up (VIDEO) 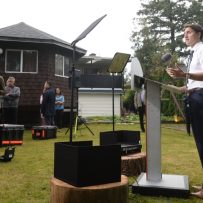 Housing has emerged as a hot-button topic in the federal election campaign, with party leaders unleashing a slew of headline-grabbing promises over the last few weeks.

The so-called B-20 mortgage stress test, an incentive aimed at helping first-time buyers, and an update to the RRSP Home Buyers’ Plan are among measures that have been introduced since the current Liberal government came into power in 2015. But affordability is still top of mind in the lead-up to the Oct. 21 vote, especially in markets like Toronto in Vancouver, where home prices are some of the highest in the country.

WATCH A SPECIAL EDITION OF RHB TV AS HUGO DOS REIS AND JOHN DICKIE SIT DOWN TO DISCUSS HOW THE UPCOMING FEDERAL ELECTION IS GOING TO IMPACT THE RENTAL HOUSING INDUSTRY!

Pasalis’ take: “One of the problems is high debt levels in Canada. If you look at the markets that are the most unaffordable, in particular Toronto, the market doesn’t need much more stimulus right now. It’s already really competitive. So generally, [the stress test is] probably not the best policy to ease [for first-time buyers] right now.”

“Removing [the stress test] from renewals is not a bad idea.”

The pledge: Increase the amortization period for insured mortgages to 30 years, reversing the previous Conservative government’s move to decrease it from 40 to 25 years.

Pasalis’ take: “In Toronto, [increasing the amortization period] would certainly add more fuel to the fire because the market’s already very competitive. But in a lot of other cities that are not as unaffordable as Toronto, do you really need that stimulus? Do people need to be going with 30-year amortizations when they’re buying in markets where homes are not eight times their income, like Toronto? So generally, it’s not a good policy because it’s just going to encourage higher levels of household debt. I think it would almost certainly drive house prices higher.”

Pasalis’ take: “I think in theory that could be a good approach, but I think that’s a long-term plan for housing. These types of policies don’t really help us in the short term; they might help 10 years down the road.”

The pledge: Liberal leader Justin Trudeau has vowed to expand his newly-implemented First-Time Home Buyer Incentive by including homes valued at a maximum of nearly $800,000, up from about $500,000 in Vancouver, Toronto, and Victoria.

Pasalis’ take: “I think this one will probably have less impact on the market than increasing amortizations, which everybody can benefit from. I don’t think as many people will sign up to partner with the government to buy a home as you would have people getting a 30-year mortgage.”

The pledge: Implement a national one-per-cent speculation and vacancy tax.

Pasalis’ take:  “This is actually a very good policy because it mirrors what B.C. has done. A lot of people said, ‘There are no vacant homes, these things aren’t issues.’ Then, when they implemented this tax, we started to see all sorts of luxury properties getting listed for rent for almost nothing, so people could just avoid these taxes.

“It’s also great because one of the problems with introducing these types of policies provincially is that when B.C. introduces something, like a foreign buyers’ tax or a speculation tax, it pushes people to Toronto. When Ontario does something, it pushes people to Ottawa or Montreal. And that’s kind of what we’ve been finding when these policies are introduced provincially. So having something that’s national will help mitigate those types of flows.”

The pledge: The NDP has promised to create 500,000 new affordable housing units over the next decade, if elected. Similar to the Conservatives, NDP leader Jagmeet Singh also says he’d re-introduce 30-year terms for insured mortgages for first-time buyers.

Pasalis’ take: “Of course the idea of building 500 new affordable housing units is great. But is it going to get done and how is the key thing.”

The pledge: Implement a 15-per-cent foreign buyers’ tax on purchases of residential property.

Pasalis’ take: “I’m mixed on this one. I think the Liberal plan is probably a better one because it curbs bad behaviour of leaving properties empty, and it’s more of an ongoing tax. I don’t think it’s going to help in the biggest markets – in Toronto and Vancouver – because [those places] already have one, unless they are suggesting adding one on top of that, which will make it 30 per cent. It’s decent policy, but it may be too much to have nationally.”

The pledge: Remove GST and HST on the construction of new rental units, and give up to $5,000 in rental subsidies to help 500,000 households pay for housing.

Pasalis’ take: “I think any policies that reduce frictions to build rentals are good.”

The pledge: Dedicate a unit of the RCMP to fight money laundering, and create a national registry to prevent companies from hiding who profits from real estate.

Pasalis’ take: “The Conservatives said they’re going to plan and do research into [money laundering] whereas at least the NDP announced that they want to track beneficial ownership of properties. So it seems like they’re actually trying to push policies that curb it, rather than doing what the Conservatives say they are going to do, which is ‘We’re just going to study for the next four years.’”

Pasalis’ take: “I think it might just save us some money because I don’t know if it’s going to be a very popular policy – and I don’t know if throwing government money into buying homes is a good policy. I would say it would be better to scrap it and invest [the money] into rentals, for example.”

Pasalis’ take: “Any tax incentives that the government can put in place to encourage purpose-built rentals I think is certainly good.”

“It’s a bit surprising that we don’t have one. I think it’s partly because perhaps the [federal government] sees housing as a provincial issue. But it’s all interconnected. You can’t have the federal government deciding [the] rate of immigration without caring at all about how we’re going to house people. And when housing is pretty much the biggest component of our economy … I think it would make sense to have a national view of housing and housing policy. So that does make a lot of sense.”