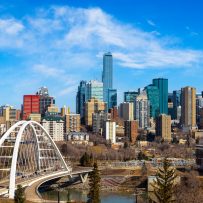 Edmonton’s rental market saw modest but growing demand in 2022, setting the table for steady growth in 2023 while remaining very affordable compared with other large cities.
“Among major cities like Calgary, Vancouver and Toronto, Edmonton is the cheapest rental market,” says Hazel Wong, a Vancouver-based analyst with Liv.rent, an online marketplace for rental listings.
While Calgary and other centres saw double-digit percentage increases in rental prices in 2022, Edmonton saw more modest rises of about seven per cent, she notes.The average rent in December in Edmonton for a listed unfurnished one-bedroom was $1,143 a month compared with Calgary at $1,498.

Rents are nearly double in Toronto at $2,082 for a one-bedroom. Vancouver’s monthly average rent for a listed one-bedroom was in December at $2,227.

As well, unlike Toronto and Vancouver, the city also features more three-bedroom rental units with average prices starting as low as about $1,500 a month in the west end. In contrast, Scarborough featured the lowest rent in the Toronto area for a three-bedroom at $2,954 a month in December.

Liv.rent figures reflected rents for the secondary market—private owners renting condominiums, townhomes and single-family detached homes.Yet Edmonton’s new purpose-built rental market experienced even less growth in 2022, with rents increasing about two per cent for a one-bedroom to about $1,400 a month, Zonda Urban data for its third quarter report shows.

As a result, the city has a much larger stock of purpose-built rentals than Calgary to absorb rising demand without pushing up rental costs as much. In contrast, Calgary has a larger share of its rental market made up of the secondary market.

Still, demand for purpose-built rentals in Edmonton grew in 2022 as vacancy dropped to about six per cent for new builds, down from about 16 per cent in early 2021, Zonda third quarter data shows.In part that was driven by higher interest rates on mortgages.

“Challenging market conditions are affecting first-time buyers in Edmonton, and that has led to a large decrease in sales while supporting rental demand,” Slavik says.

“There is lots of talk of a looming recession in Canada.”

He further notes the ‘soft landing’ the Bank of Canada has been aiming for the economy as it hikes interest rates to ramp down inflation is becoming a less likely outcome.

In turn, real estate is likely to continue slumping nationally, but Edmonton—like Calgary—should buck this trend as long as energy prices remain elevated, drawing higher migration amid relatively low inventory for homes, for purchase and rent.

“We expect the current trend of migration patterns to persist,” he says. “So low supply for housing isn’t likely to change anytime soon.”