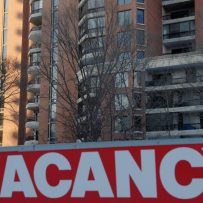 The rental market got a little tighter over the last year in Edmonton with the vacancy rate falling to 4.9 per cent from 5.3 per cent in 2018, even though supply was on the rise.

Despite growing demand, the market still remains favourable to renters in the city as supply continued to grow with “more than half of the supply coming from condo units converting to rentals.”

The CMHC’s Rental Market Report, released this month, pointed to 40 per cent of the condominium market supply designated as rental units.

In part this phenomenon may explain why Edmonton Realtors Association data from last month showed condo prices rising year over year by almost eight per cent.

Indeed the conditions likely support condominium conversions. A recent national survey of buyer intentions by the brokerage Zolo Realty suggests would-be buyers are planning to rent for longer. It found only 15 per cent of those surveyed indicated they would be buyers in the market this year, with more than 40 per cent noting they would not be looking to buy a home in the next five years.

Director of operations at Zolo Realty for Alberta, Kevin Ali says home ownership has always been and remains a goal for many young Albertans.

But it’s been put on hold for a variety of reasons.

“While the mortgage stress test had an impact on some consumers ability to qualify for a mortgage, that impact was felt more in provinces like Ontario and British Columbia where property values have generally trended upwards over the past several years.”

Instead a weak economy and tepid job growth have likely slowed down the real estate market in Alberta more in the last few years. Growth, though, has been fairly strong in the under $300,000 segment — those typically can be converted into rentals more easily than higher priced homes.

Sun notes CMHC data shows people are likely renting longer in Edmonton as turnover rates fell from 32 per cent in October 2018 to 29.4 per cent for the same month last year.

“That probably means people stay put longer and likely want to see how the real estate market goes before making a decision.”

Despite the challenges with the economy, growth in the rental market points to improving conditions, Sun says.

Vacancy has been falling since 2017 while supply has been increasing, which she adds explains why rents have held steady, only up 0.9 per cent year over year to $1,144 a month. Vacancy rates were lowest among three-bedroom or more units at 3.9 per cent with an average rent of $1,394. The vacancy rate was highest among bachelor units at 5.1 per cent with rents averaging $878 a month. One-bedroom suites saw a 4.9 per cent rate and rent of about $1,028 a month. And two-bedrooms’ vacancy rate was five per cent at $1,257 a month average rent.

“Rental supply has been steadily growing, which reflects how the economy is now slowly growing,” she says. “As a result, people are starting to move to Edmonton, especially with respect to international migration.”

Still CMHC’s report pointed to persisting job growth challenges. Job losses, for example, were at 16,000 through the first 10 months of 2019.

“Even then, for this year, we will probably see a similar vacancy rate, but with perhaps more tightness (of choice) in the rental market.”