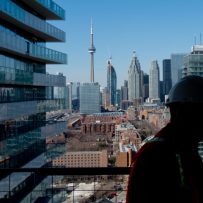 It was just four Toronto condominium developers and questionable statistical reporting that led to news earlier this year about a glut of high-rise units in Canada’s largest market, says a new report.

Canadian Imperial Bank of Commerce deputy chief economist Benjamin Tal says in a report out Monday that even the Bank of Canada has been fooled by the raw numbers about unabsorbed or unsold units that once broken down appear to be a bit deceiving.

“The big question is to what extent the condo markets in (Vancouver and Toronto) are overshooting. The answer, of course, is multi-dimensional, but a good starting point is to assess the trajectory of recently completed and unabsorbed units,” said Tal, in his report. “An increase here suggests that developers are finding it increasingly hard to sell completed units — usually a first sign of troubles ahead.”

In Vancouver, the number of unabsorbed units fell over the past year from just over 2,000 to the current 1,100 indicating an improving situation, he writes.

But Tal says towards the end of 2014 and early 2015 there was a notable increase in the number of completed condominiums in the greater Toronto area. In a record housing year in 2012, the GTA saw just under 50,000 housing, 30,000 condos.

So what happened? Canada Mortgage and Housing Corp. decided to register 10,000 condos in the month of January. Tal says that according to CMHC, the GTA has seen no less than 26,000 condo completions in the first half of this year — three times more than the level seen in previous years.

“Registering a completion is more art than science, as different data providers use different criteria,” said Tal, noting other data providers such as RealNet have chosen to distribute their completion count more evenly — a fact that resulted in a less volatile count of unabsorbed units.

What happened using the CMHC data is that between December 2014 and May of this year, the number of unabsorbed units rose in Toronto from less than 1,000 to close to 3,000 — a level that is even higher than those seen in the early 1990s.

“This meteoric ascent was not only highlighted by the Bank of Canada as a sign of vulnerability but also by various short-Canada investors — using that surge as the ultimate illustration of the bubbly Toronto condo market,” said Tal, noting that since the numbers first came out completed and unabsorbed units fell over 800 in a month.

Now that the CMHC’s completed units have leveled off, it says there about 2,000 unabsorbed units in the GTA which is the same numbers that RealNet is now reporting— still a high level but not nearly as dramatic as 3,000.

So where did CMHC’s original numbers go awry? About half of the completed and unabsorbed units are in city of Toronto, but more importantly one third of all unabsorbed units, were constructed by four developers. And five projects coming on at once accounts for about one quarter of the unabsorbed units on the market today.

“To be sure, the GTA’s condo market will be tested as interest rates start rising in the coming years, and increased resale activity from domestic condo investors will result in excess supply and some downward pressure on prices,” says Tal. “But for now, those who look at the rise in unabsorbed units as a sign of increased vulnerability are barking up the wrong tree.”