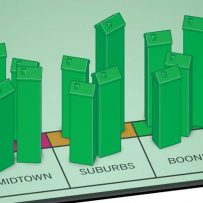 Hamilton builder Jeff Paikin has been in the real estate industry for almost three decades, but his days of building single-family homes may be over.

He’s all but given up on detached homes and now focuses on more budget-sensitive condominiums and townhomes in what are ostensibly the suburbs of Hamilton. His latest project in Stoney Creek is the largest single-phase condominium in that city’s history at 470 units. Hamilton builder Jeff Paikin has been in the real estate industry for almost three decades, but his days of building single-family homes may be over.

“Hamilton didn’t even have a condo market eight years ago, you couldn’t recover your costs,” Paikin said. “Now there are a few projects that are planned or being built. It’s even hard to get the land for townhomes. Detached homes? Forget it.”

About 60 kilometres west of Toronto, Hamilton’s property market is booming to the point that people looking for deals in the Greater Golden Horseshoe (GGH) — a southern Ontario area home to nine million people — have long since given up on even Steeltown, never mind Toronto, and that’s driving both increased density and increased prices in the surrounding region.

The average price of an existing home for all classes of housing in the Hamilton-Burlington area reached $607,846 in March, up 30.1 per cent from a year ago.

Canada Mortgage and Housing Corp. said there were 2,119 new housing starts last year, but only 771 were single-detached homes. The rest was a mix of higher-density housing: 1,010 rowhouses, 228 apartments and 110 semi-detached homes.

Just a decade earlier, detached homes made up of 56.5 per cent of all new construction in that area, rowhouses made up half what they do today and only about 100 new apartments broke ground.

Clearly, increased density is no longer just a big-city issue.

“You look at the big three, Toronto, Montreal and Vancouver, and you see a similar pattern,” said Doug Norris, chief demographer at Environics Analytics. “The downtowns are even more concentrated with young people. But if you look at the proportion of seniors living in apartments, it also starts to pick up around age 60-64.”

Norris said an aging population will drive the need for smaller high-rise accommodations as people look to downsize and take some of their equity out of their homes. The town of Milton, Ontario in the foreground with Mississauga on the horizon. Toronto’s hot housing market is driving both increased density and increased prices in the surrounding region.

Statistics Canada said last month that the percentage of the population 65 or over was higher than the under-14 segment for the first time since Confederation.

“You’re also seeing a suburban population that is not just younger people (seeking cheaper real estate), but older people looking to downsize after spending their lives in the suburbs,” Norris said. “You see this phenomenon over denser housing because people want to age in the neighbourhood they are used to.”

Developer Paikin said the first phase of his new project in Stoney Creek included 78 townhomes and condo units in a four-storey 129-unit complex. The sales launch two-and-half-years ago, before the local market really took off, saw everything sell in one day.

The second phase of the project, a six-storey condominium with units starting at $199,000 and going up to $500,000, continues to be driven at least partially by investors who have bought up about 40 per cent of both projects.

“The demand for rental income is very, very high. Every single unit up for rent has rented,” said Paikin, adding that proximity to transit is what continues to drive the housing market.

The province is putting in a station on its regional transit system not far from his Stoney Creek development. “It’s coming soon, so people are trying to get ahead of that,” he said. Developers in areas surrounding Toronto have all but given up on detached homes and now focus on more budget-sensitive condominiums and townhomes.

Paikin doesn’t see the need for more density dwindling anytime soon and he has plans to launch the first big condo project in Waterdown, another Hamilton suburb. It includes three 12-storey buildings and one six-storey structure and he expects buyers to come from all age groups.

“This was unheard of just three years ago,” he said. “If you have a single-family home in Waterdown that is now worth $900,000, you figure I’ll downsize early and pocket half that money. Then you’ve got first-time buyers because the site is five minutes from a Go (train) system.”

In Ontario, provincial legislation has created rules that demand more density in existing built-up areas, which developers maintain is at least partially driving up prices and limiting new detached homes. British Columbia has encouraged the same type of development in and around Vancouver.

North of Toronto, York region seemed to have had some inkling of what was coming and launched an official plan in 1994 based on what it calls a Centres and Corridor program.

“This was long before the provincial (growth plan),” said Valerie Shuttleworth, the region’s chief planner, about the program that combines the planning of urban pedestrian friendly/walkable communities with the construction of new rapid transit lines and stations. “We have been directing significant financial investment and infrastructure to support (the program).”

It’s paid off. In the past three years, York region has added 10,000 high-density units, which was more than the Greater Toronto Area regions of Peel, Durham and Halton combined. York was second behind only the city of Toronto in terms of creating high-density housing.

“These centres have become real hubs of activity,” Shuttleworth said. “I think in York Region, we didn’t want to become a bedroom suburb of Toronto. We realized with growth coming our way, we had an opportunity to build cities.”

Tim Hudak, chief executive of the Ontario Real Estate Association, sees the future of housing developing around what is called the “missing middle” — essentially a message that means more density but not necessarily more highrises.

“It may have different parameters. In Toronto, it may have seven to nine storeys, but three to five stories in the near GTA and maybe stacked townhouses in the outer ring,” he said,

Some municipalities will need to update their zoning bylaws, Hudak added, because they either allow for highrise condos or ground-level homes but nothing in between.

Hudak said throughout the GGH there needs to be what he calls “gentle densification,” especially along transit lines.

“What was fine for the 1960s or 1970s is not right for 2017,” he said, adding that municipalities should allow more density around infrastructure or face not getting provincial funding.

Across the country in Vancouver, Curtis Scott, Colliers International’s manager of market intelligence for Western Canada, also see what he calls more “diverse housing stock” in the suburbs.

“I try to get people to think of these areas like Burnaby as regional business districts, because they are really not your traditional suburb anymore,” he said. “You’ve got 40-storey-plus concrete towers, but with townhouses and duplexes below. They are not building single-family homes.”