Doug Ford and Cabinet Sworn In 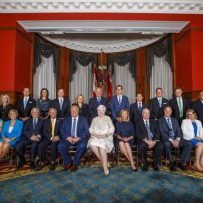 Congratulations to Doug Ford, who was sworn in as Ontario’s 26th Premier earlier today.  The following Cabinet Ministers were also announced, and sworn in.

As providers of rental-housing FRPO’s members have extensive experience and knowledge to share with the new government.  Working together we can stimulate much needed new supply and improve the overall operating conditions for rental housing in Ontario.

The new ministers are as follows:

•   Peter Bethlenfalvy – President of the Treasury Board

•   Victor Fedeli – Minister of Finance and Chair of Cabinet

•   Rod Phillips – Minister of the Environment, Conservation and Parks

Steve Clark was first elected MPP for Leeds-Grenville in a March 2010 byelection.

In 1982 Steve Clark was elected as the Mayor of Brockville at the age of 22 – Canada’s youngest mayor – where he served for three terms.  During this time, he was also the President of the Association of Municipalities of Ontario.  He later went on to serve as the Executive Assistant to MPP Bob Runciman.  Just prior to being elected as MPP, he was the Chief Administrative Officer for the Township of Leeds and the Thousand Islands.