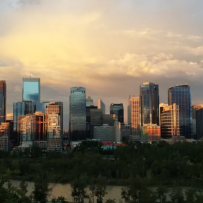 The apartment rental options in Calgary are getting a little more upscale.

Some real estate industry analysts are expecting a growth in the supply of purpose-built rental units across Calgary as several large projects, including some new towers with major investment behind them, are coming online.

“What is surprising though is the fact that we’re seeing as much confidence in the rental market in Calgary to get 11 developers to go ahead all at the same time and that, I think speaks to confidence long term,” said Matthew Boukall with Altus Group.

Boukall said four of those buildings will be completed by the end of 2020.

He says they’ve been tracking rental construction trends for several years, including a surge of project completions in 2016, and that other Canadian markets are seeing similar trends.

He doesn’t believe it’s directly related to the current weakness in the condo market.

Strategic Group, another developer, has just opened a new, 39-storey building in the Beltline called Upten.

CEO Riaz Mamdani says it includes 379 rental units with main floor retail and a rooftop lounge. He said they have been surprised by the level of interest in the first weeks.

“We’ve had hundreds of inquiries, dozens of tours and dozens of tenants that have committed to moving in in the next number of weeks,” Mamdani said, adding that the rental market is changing with the times.

“Tenants are becoming significantly more discerning,” Mamdani said. “The dilapidated apartments that are out there that were built 50 and 60 years ago that are the majority of the apartment universe in Calgary are starting to become functionally obsolete, and people have a desire to move into the inner city, they want to be in highrises, and they want to be in brand-new places with amenities.

“That’s the future of apartment residential rentals in all cities including Calgary.”

Mamdani said these renters are choosing to pay a flat rate to rent, rather than wade into the market, according to the company’s consumer surveys.

“Our tenants that are moving into our new projects — and keep in mind these aren’t inexpensive projects — these tenants can afford their own homes, they can afford their own condos, they’re choosing to move into our rentals because we give them certainty, they know what it is they’re going to pay,” he said. “They can save their equity elsewhere. They’re not risking their life savings to invest in a market that has as of late been quite volatile.”

“So, it’s the approach towards risk. It’s the impact of the millennial thinking on home ownership. It’s the millennial desire to be in the downtown core,” he said. “We’ve done a number of projects in Calgary and Edmonton that are residentially focused, because of the trend that we’ve seen towards people wanting to live in brand new apartments in whatever market.”

Both Mamdani and Boukall agree the trend is unprecedented.

“We haven’t in the history of Calgary had this number of residential towers or this volume of residential units that’s going to be entering the market,” Mamdani said.  “Calgary is following worldwide trends where people are excited and happy to live in highrise towers. That’s what our residents are looking forward to. That’s the experience they want.

“They want new buildings, big buildings with infrastructure, with a concierge, with a level of service, with COVID-19 safety rules in place. They want all of the air exchanges that a new building with new technology allows you to do, in order to be safe and healthy.”

Mamdani believe this trend toward higher-end rentals with amenities will continue in Calgary and Edmonton, adding that an inner-city location is one of the main drivers.

“There is a demand for apartment buildings, notwithstanding the 1,100 units that have been delivered in Calgary over the last year, our vacancy rate has actually decreased,” he said. “That also is the same for Edmonton.”