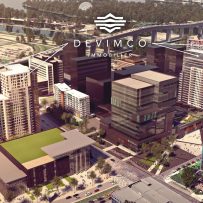 Devimco Immobilier applauds the imminent signing of a memorandum of understanding with the City of Longueuil that will pave the way for the development of a major and avant-garde multifunctional real estate project in the area of the city’s downtown core and Longueuil–Université-de-Sherbrooke métro station. The agreement must first be approved by Longueuil City Council on May 26.

Valued at nearly $500 million, this transit-oriented development (TOD) project, with a total area of 1.2 million square feet, will include the construction of 1,200 housing units. It is the largest economic project to be announced in Québec since the start of the pandemic.

The project, whose name will be announced later, will be built above and around the Longueuil–Université-de-Sherbrooke métro station, an ideal location that blends all the conditions needed for future success. The two project sites will create a real synergy between the various components, to produce a superior-quality living environment for future residents, workers and visitors. This is a highly strategic sector for public transit and mobility.

“Our Longueuil project will be revolutionary because it will be based on concepts that will respond to the new realities generated by the pandemic,” announced Serge Goulet, President of Devimco Real Estate. “Discussions are currently under way with Québec furniture industry players to adapt the apartments and condos for teleworking.”

He added: “Our project is the first one to be part of the City of Longueuil’s vision for redeveloping its downtown core. Devimco is proud to be a forerunner in the development of this high-potential area.”

The project includes a residential component, with two 22-storey buildings for rental units and two 22-storey condominium towers. The rental buildings will overlook a vast lower extension (basilaire) above the existing métro station, while the condo towers will also be built over commercial galleries. They will be erected on a portion of the P2 parking lot. Underground parking facilities will also be developed on the outskirts of the new buildings.

Already served by local businesses, the Longueuil–Université-de-Sherbrooke métro station site and its surroundings offer opportunities for quality commercial development, as well as a strengthening of its educational vocation. The site is already a knowledge hub with the presence of three universities: the campuses of Université de Sherbrooke, Université de Montréal and Université du Québec à Montréal (UQAM).

Devimco’s project is a real sustainable development initiative. The infrastructures that will be added to the existing complex introduce winning conditions and the breath of fresh air needed to make this site, just steps from the Vieux-Longueuil district, a superb location for the convergence of best practices in environmentally responsible urban development. This sector offers a variety of strategic sustainable mobility alternatives and is a major public transit hub with its métro station and bus terminal serving all of Longueuil as well as several other neighbouring municipalities in the Montérégie region.

“Our project is aligned in every way with Devimco’s philosophy. The recipe is simple, but ambitious,” Mr. Goulet noted. “We are responding to Longueuil’s vision by designing a multifunctional urban hub where a combination of experiences is an essential condition for creating a true living environment. What we are developing is an integrated blend of amenities, in spaces where homes, work environments and local services are located side by side. It will also be possible to enjoy cultural and food experiences, and even—as is already the case—to study there.”

Devimco Immobilier is a Québec real estate development leader that stands out for the creation and execution of large real estate projects, in particular lifestyle and TOD complexes that combine commercial, business, leisure, and housing components. The company’s real estate projects are noteworthy for producing unique living environments that take into account the needs of the people in the community.

Since 2005, Devimco Immobilier has been developing District GriffinTM a vibrant area where a genuine community is taking root. Another of its projects is SOLAR UniquartierTM, Québec’s largest TOD project and a $1-billion development destined to become top destination on Montréal’s South Shore. Devimco Immobilier is also building Square Children’sTM, a new flagship project at the western extremity of Montréal’s downtown core that is revitalizing the former site of the Montréal Children’s Hospital and the entire neighbourhood. The developer will also begin construction this year on the MAA Condominiums & PenthousesTM on Peel Street in downtown Montréal, a project as rich as the history of the MAA Sports Club, whose revitalization will be part of it. Maestria CondominiumsTM, the largest mixed-use residential project ever built in Montréal, located on the site of the former Montréal Spectrum in the heart of the Quartier des Spectacles, was also launched in late 2019. It was followed, in 2020, by the launch of Auguste & Louis CondominiumsTM, a unique project that is serving as the first phase of the Quartier des lumières, located on the site of the former Maison Radio-Canada building.