Developers building more condos than ever before 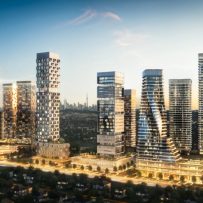 Canadian real estate developers are on a tear, starting construction on a record number of multiple-unit projects.

A November surge in everything from semi-detached homes to condos has brought the number of housing starts over the past 12 months to the highest on record in data going back to 1959, according to figures released Friday by the Canada Mortgage and Housing Corp.

The jump surprised policy makers and analysts particularly given the softening that has taken place in the Toronto resale market, the country’s largest, in recent months.

On an annualized basis, multiples construction in urban areas jumped to 175,016 units in November, CMCH said. The surge drove the total number of housing starts to an annualized 252,184 units, the highest since 2012. That’s up from 222,695 units in October and well above the 213,000 expected by economists.

The pick up in activity — annualized starts have surpassed the 200,000 threshold for six straight months — come as the Toronto market is correcting. The benchmark price index for homes in the city is down 8.8 percent since May. That discrepancy may be because much of the condo construction taking place now has been pre-sold, meaning it doesn’t necessarily map exactly with current market conditions or factor in the impact of recent regulatory measures to rein in the market.

“I would remain cautious toward the multiples surge in Ontario,” Derek Holt, an economist at Bank of Nova Scotia, said in a note to investors. “Given project lags, the numbers we’re seeing reflect decisions that predate rent-control changes in April that many feel will sharply diminish investor appetite for such units.”

Yet, fundamentals also seem to be at work, with a buoyant economy and rising immigration levels driving demand. Prices, meanwhile, remain inflated in Toronto even with the slowdown. Ontario builders recorded their strongest month since 2012 in November.

And the new construction has been broad-based across the nation. New building in Quebec is at the strongest pace since 2012, while home starts in British Columbia are set to be near records in 2017.