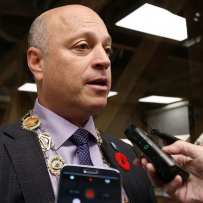 A believed first in Ontario, the City of Belleville is embarking on an innovative approach to motivate developers to create new affordable housing stock in the city through the waiving of city development charges and rebates on building permits.

As part of its draft Community Improvement Plan released Friday, the city has added new proposed measures to offer developers up to $11,000 in cash incentives for every affordable unit to be built in future within the city.

The more units a new multi-residential development contains, the larger the cash incentive which may encourage larger projects to move forward to reduce a housing crisis in the city being spurred on by high demand in the city real estate market.

The new plan will allow taxpayer input in a public meeting November 2.

If approved by city council after amendments to the city’s Official Plan, Mayor Mitch Panciuk said the municipality would waive development charges by up to $9,000 per unit as well as $2,000 in building permit fees per unit.

Tax grant credits from the Canadian Mortgage and Housing Corporation (CMHC) will also be available to developers to further entice developers to create apartments for lower-income city residents.

“Development charges are anywhere from $5,000 to $9,000 per unit and building permit fees are about $2,000. Potentially, there could be waiving of $11,000 per unit to help build these areas,” the mayor told The Intelligencer Monday.

“In addition, we have the ability to give people some kind of tax grant that would be a credit to their tax bills and they would get the benefit afterwards.”

In year one of the measures, the city has put away $300,000 to cover the lost revenues from waived development charges and building fees and the city is hoping in future to increase that reserve fund to up to $1.5 million in incentive money to boost housing starts, he said.

“I would like to see 5,000 additional rental units constructed in our market. I think that will take pressure off the high prices that people are paying and that will mean that people can afford to live in a safer, cleaner place than they are living now,” he said.

The mayor said a lot of work has gone into the unique proposed housing portion of the Community Improvement Plan and a lot of eyes across Ontario are watching to see the effectiveness of waiving development and building costs.

“I think a lot of places in Ontario are watching us, the ministry is watching us because they are interested in doing this as well,” Panciuk said.

Addressing housing is only part of the new plan which is also looking to support the revitalization of downtown Belleville and remediating historic brownfield properties in the city to clear the way for new developments on former industrial lands.

In a press release, the city said it has awarded “Dillon Consulting the assignment of developing the new Affordable Rental Housing CIP, updating the City’s existing Downtown CIP and coordinating a consolidated Master CIP that would prioritize programs related to affordable rental housing.”

The draft CIP is available on the city’s website at www.belleville.ca/cip.

The “CIPs are a tool used by municipalities to encourage revitalization and growth in the community through a series of programs, grants, and financial incentives. The new CIP includes 17 different programs which provide financial incentives for development and remediation projects that support the goals of the CIP,” the municipality said.

“With the new plan in place we will be able to be proactive, strategic and expedient in addressing the needs of our community,” said Stephen Ashton, Director Engineering and Development Services. “We encourage you to review the draft plan and we welcome your feedback.”

On a completely different front, meanwhile, the City of Belleville, is developing its first Parkland and Recreation Master Plan to enhance the City’s public park system, including land acquisition, development/ redevelopment, community use and funding over the next 10 years.

Story by: The Intelligencer