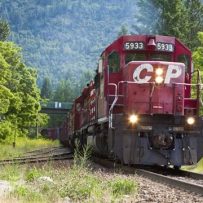 Canadian Pacific Railway Ltd. (CP.TO -3.34%) has formed a partnership to develop its portfolio of surplus real estate, as the company looks for new ways to boost cash flows and shareholder value.

Hunter Harrison, CP chief executive officer, has been saying for more than a year the Calgary-based company wanted to sell real estate worth $2-billion as part of its efforts to become leaner and more efficient.

The announcement on Tuesday did not put a dollar value on the portfolio, and instead said the company would “develop” the land with Dream Unlimited Corp. (DRM.TO -1.21%), a publicly traded company that manages more than $14-billion worth of real estate in North America and Europe. The joint venture will be called Dream Van Horne Properties, named in part for one of CP’s first presidents, Sir William Cornelius Van Horne.

The properties include Schiller Park, a 75-acre site in Chicago; Obico, a 74-acre site in Toronto; the 92-acre South Edmonton Yard; and Montreal’s Lucien L’allier, a three-acre site.

Royal Bank of Canada analyst Walter Spracklin said the news was good for the railway, but said his financial forecasts for the company are not changed, pending discussion with management on the timing of the venture and the expected cash flows.

“We view this announcement favourably as the deal helps CP execute on its long-standing objective of monetizing surplus real estate across the network,” Spracklin said in a note to clients on Tuesday. “The company had previously identified $1-billion of excess real estate; therefore, a key question for management is what proportion of the surplus portfolio is included in the joint venture,” Spracklin said.

Martin Cej, a CP spokesman, said the joint venture will focus on 30 rural and urban properties in North America.

The project is the result of a study of the company’s assets that began three years ago and identified surplus and underused properties.

The venture will be led by CP’s vice-president of corporate affairs, Mark Wallace.

CP will provide the land and Dream will provide the expertise to build and market the developments, which could include commercial, residential, industrial and mixed uses. Details of the revenue sharing have not been finalized, Cej said by phone from Calgary.

The company is not ruling out the sale of any real estate. “Everything is on the table,” Cej said.