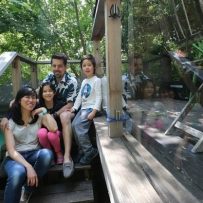 Architect Joanne Lam and her husband Eric Martin had long been aware that their typical Toronto life was missing the close community they experienced growing up – she in Hong Kong, he in North Bay.

That absence became acute when COVID-19 kicked in.

“Two weeks into it, that’s when the sense of isolation really hit,” said Lam.

Like a lot of people with young children, she and Martin, a designer, longed for just a couple of hours to themselves. At the same time, she said, they could feel the loneliness gripping her parents and single friends.

Lam has been working on concepts designed to facilitate co-living — shared arrangements that foster resiliency and affordability.

“We are all experiencing a different kind of isolation. If we had all been in a co-living situation to begin with, we would have already had this built-in community. It would make us, as a bubbled household, resilient because there’s always somebody there who could help out, and there are spaces to be alone if you don’t want to interact with other people.”

The GTA has been mired in a housing supply and affordability crisis for years. COVID-19 showed us just how vulnerable we are financially and socially when it comes to sheltering ourselves from the insidious threat of the virus.

If people were seeking new models of housing before the pandemic, the last three months have proved how badly the region needs more bricks and mortar — and more options for everything from how we habitate to how we finance our homes.

“If we’ve learned anything out of this crisis it’s that a safe place is a key thing for health and ability to withstand these kinds of events,” said Canada Mortgage and Housing Corp. (CMHC) chair Derek Ballantyne.

Home has never been more important. But it’s become all too obvious that many of us don’t have the home we need, said real estate agent Lesli Gaynor, who specializes in co-ownership housing.

Gaynor helps people connect with one another, and find the bricks and mortar and financing it takes to establish the kind of communal arrangements that the traditional building and lending institutions haven’t necessarily embraced.

She expected her phone would stop ringing when the lockdown began. Instead, she has been surprised by how many people have called because they are exploring new models of living and owning a home — people who never thought they would consider co-owning.

“I think people realize how fragile they are financially,” she said.

There are many people who have seen their income diminished or disappear, who are wondering if they can afford to keep the homes they worked so hard to buy, she said.

But it goes deeper. Gaynor said the pandemic has also shown us what the future looks like without community connections — what can happen if we aren’t able to live independently because of age or disability.

People are frightened, said Gaynor. They are thinking about how they can avoid being part of the crisis that has afflicted the long-term-care sector.

Most people suspected there were issues in senior care, but now they are forced to confront the reality that “institutional care is not sustainable in a healthy way.”

“The forced feeding, the stuff that the military was uncovering…Nobody could cover it up any more,” said Gaynor.

She and Lam are among the experts who say COVID-19 is an opening for a bigger dialogue about redistributing the wealth and the space apportioned to real estate.

In January, Lam and Gaynor’s booth at the Interior Design Show surveyed visitors to identify which household spaces and property they would be willing to share. No surprise: most people preferred a private bathroom.

But respondents were overwhelmingly willing to share indoor and outdoor recreation space. They were split on allowing others to use their fine china, but most were happy to share books.

Now Lam and Martin’s company, Picnic Design, has embarked on what she calls her most exciting experiment — a “proof of concept.”

They have purchased a two-storey house in the west end with a plan to create a co-ownership property where each of three or four owners get generous private space, but share a yard, laundry room, kitchen, guest space and living areas.

Lam says they are not developers, so the project isn’t being built with an eye to a profit. It’s the bricks and mortar that she hopes will help fuel the grassroots demand that would force institutions — cities, banks — to make co-ownership with built-in community a more accessible option.

There are hurdles to jump at city hall, but the best-case scenario is to build it in about two years, said Lam.

It’s one of the many small solutions that nibble around the edges of Toronto’s persistent issue, which is affordability, said CMHC’s Ballantyne.

But the virus’s deepest impact on housing might well be how we view it in relation to the city’s most vulnerable. COVID-19 has made it more difficult to look away from the housing crisis, he said.

“I think we’ve been able to think we’re dealing with the issue by building more shelter beds,” said Ballantyne. “There is probably a greater will now and a greater interest in finding permanent housing solutions for very low-income and individuals facing the greatest challenges.”

Nothing less than a prohibition against COVID evictions is going to save as many as 13,000 Toronto tenants from being pushed out of their homes, he said.

But the 15-year tenant advocate says there is inspiration as well as exhaustion in the activism that has begun to swell around issues such as above-guideline rent hikes and unacceptable living conditions.

“It’s been amazing to see in particular some of the neighbourhoods in East York and Scarborough, which are largely immigrant and racialized districts where a lot of people have kept their heads down for a long time about the conditions of their housing, about their struggles to pay rent, about evictions,” said Webber.

“You see tenants in Goodwood Park, in Crescent Town, Teesdale, these east end apartment districts, who have organized, who have brought demands to landlords about above-guideline increases, about the poor conditions they’re living in,” he said.

Webber says that small “mom-and-pop” landlords, who rent out their basements, have a limited role in Toronto’s rental troubles.

But those homeowners could also have a role in creating more affordability, said Jake Fry, a laneway home builder in Vancouver, who is the co-founder of non-profit Small Housing BC.

Its premise is to maximize the potential of city land by building more units on single-family lots. It’s a way of bringing in more revenue to city and creating more smaller, affordable homes, he said.

His company, Smallworks, has built about 300 laneway homes in the last 10 years and Fry says sales have doubled since the COVID lockdown.

One large lot might accommodate five households — either through townhomes or a mix of reconfigured space, including laneway and basement suites.

The homeowner lives in one unit and three others could be sold at market price. Because of the higher density, however, those homes would be more affordable. The final unit would go at a deeply discounted price and is designated “affordable” in perpetuity.

The property owner comes away with more profit than they would if they were selling to downsize into a small condo and they have the option of putting some of that back into staying in one of the units on the same property — likely larger and more upgraded than the alternative.

“This has a benefit all round. Cities, which are now struggling for money, will now have a bit more revenue through taxation,” said Fry. “We’re struggling with affordability but now we’re looking at private owners playing the role and finding a solution.”

About 85 per cent of the laneway homes he’s built were made to solve family issues — adult children, who couldn’t afford to buy; seniors who can’t keep up big houses.

Fry thinks many of those clients would benefit from Small Housing BC’s value proposition. The non-profit is working with the city of Vancouver to establish three projects and come up with a province-wide model. It would act as a province-wide program administrator.

Fry, who knows Toronto, says the idea could work in places such as Leaside or Etobicoke. Suburban land has been underutilized, he said.

Revising our ideas about housing

We need to change our attitude and our practices when it comes to appropriately sheltering more Canadians, say the experts. Here are some of their ideas for rethinking the affordability problem.

We have to stop treating housing as an investment and start treating it as homes, says Eric Swanson, executive director of Generation Squeeze, a research and advocacy group for adults aged 20 to 40.

But changing that attitude would mean severe pushback from homeowners, banks and mortgage companies, which are all invested in appreciating real estate values.

Gen Squeeze suggests that we shift our taxation system to rely less on income and find ways of capturing the huge gains being generated by real estate. At the same time, we have to protect homeowners from a correction, should the market fail to generate that wealth.

“The more we expect home ownership to be profitable, the more housing becomes unaffordable,” he said.

“We need to get our heads and hearts wrapped around that very dynamic and say that, going forward we don’t want to rejuvenate our economy by organizing around an economic strategy that imagines real estate will continue to grow faster than the jobs it produces and the wages that are in the economy more generally,” he said.

“We will never solve the problem of unaffordability if we don’t say that,” said Kershaw.

Make room for everyone

We need to change our zoning to ensure everybody who wants to live in our communities can find a place and that we build out the appropriate housing forms and density to accommodate that, he said.

CMHC chair Derek Ballantyne thinks there is opportunity in Toronto to open up the “yellowbelt” — the 75 per cent of neighbourhoods zoned for single-family homes — to other forms of housing.

“This is not about coming down a residential street and putting in eight-storey buildings. It’s about selective intervention and it’s about allowing parts of the yellowbelt to intensify,” he said.

Ballantyne said there are intelligent ways of adding more homes to those neighbourhoods that does not destroy their character. In fact, studies show they improve the quality of life, shops and services available to residents.

Because the land would come onto the market as small parcels, it would be less expensive than the cost of assembling large building sites.

“It would be a way for people to be able to afford buying into those neighbourhoods,” said Ballantyne.

Buy rather than build

Instead of trying to build our way our of homelessness and the crisis in affordable housing, which is the current government strategy, perhaps we should look at buying existing rental housing, said Ballantyne.

Buying and renovating or retrofitting buildings is expensive but costs less than building new. It also adds to supply faster. But there is no magic that will make it cheaper to operate those buildings, he said.

Acquiring inventory was used in the 1970s. The early community housing programs included a significant amount of acquisitions because it was the cheapest way to keep families housed for affordable rates, said Ballantyne, who formerly headed Toronto Community Housing Corp.

“It’s not going to be simple because you’re competing with REITs (real estate investment trusts) and other large landlords for a similar inventory. But there may well be a way to incent through tax treatment or other policies the sales of buildings for affordable housing purposes to non-profits or other organizations,” he added.

“If options were presented in a different way,”said Gaynor, “people would co-house or co-live or combine on some level.”