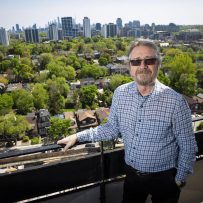 Unlike many tenants in Toronto, Jim McCarthy isn’t mad about yet another tall tower that’s popping up in his backyard.

He has lived in an apartment at 45 Dunfield Ave. for nearly 20 years, and when Shiplake Properties Ltd. came up with a proposal two years ago for two new purpose-built rental towers in the area, he and other tenants figured they had to fight back.

“The height of the buildings, the fact that they were going to be in our backyard, essentially taking away our visitors parking and our pool, and they weren’t offering any compensation whatsoever, we didn’t think that was fair,” McCarthy said.

The proposal, known as the Lillian Park Development Plan, sought to add two apartment buildings in the Yonge and Eglinton neighbourhood. With 26 and 24 storeys each, the apartments would have a total of 519 rental units. Construction is already underway and expected to finish by summer 2019.

McCarthy and other tenants at 45 Dunfield — one of the existing rental buildings in the area also owned by Shiplake — came together through their association to challenge the proposal and demand a compensation package. The tenants threatened to take the issue up to the Ontario Municipal Board or the Landlord and Tenant Board.

By April last year, the tenants and the developer had agreed on a compensation package totalling nearly $1 million, through a new process housing advocates believe could serve as a blueprint on how tenants deal with landlords in the future.

According to the agreement, each existing tenant (there are a total of 575 units at the building) received $200 upfront to put toward the purchase of an air conditioner or something else. Shiplake also agreed to a total of $200,000 to be carved off future rent for tenants in the units closest to the construction site.

In addition, tenants who were regular users of the swimming pool got a monthly rent rebate of about $20 or a pass to a community centre, until the new pool is built.

Perhaps more importantly, a 2.6 per cent above guideline rent increase that Shiplake had previously sought to apply after some renovation work will be suspended for at least 16 months starting from the time construction began.

The city also negotiated a daycare centre to be constructed at one of the buildings in the area, and existing tenants have the option to demand relocation to a similar size unit away from the construction. In an attempt to mitigate noise, the hours of construction are restricted from 7 a.m. to 5 p.m. Monday through Friday, with no weekend work.

McCarthy said there was a feeling among some tenants that they could have gotten more out of the negotiations if they held on a little longer, but the compensation package they got is a sign of what tenants are capable of achieving.

“I think it’s important that people understand what their rights are. They don’t just have to accept these different proposals that landlords are inflicting on them,” he said.

Shiplake management did not respond to requests for comment by publishing deadline.

But cases of negotiations between renters and building owners are still rare. Two years ago, a tenant association, also in the Yonge-Eglinton area, reached an agreement with Compten Management for rental discounts and moving allowances for the construction of new condos, with the help of OMB.

Wendy Lum, an organizer with the Federation of Metro Tenants’ Association who assisted McCarthy and others in this case, said tenants don’t have to feel powerless whenever they see a sign on their lawns about a rezoning application.

They can attend community consultations, attend city planning meetings and voice their opinions, she said.

“The unfortunate thing with tenants is, they’re literally being bulldozed and becoming overwhelmed,” she said, adding she hopes more tenant groups across the city will follow suit and realize they can have a say in what happens in their neighbourhoods.

“These tenants have sent a strong message. Tenants everywhere deserve more consideration as these are their homes and it is not just about profits, but about people too.”