Could These Be the 6 Worst Landlords of All Time? 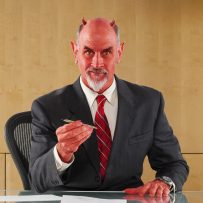 Renting always comes with the risk that you’ll end up at the mercy of a true Landlord From Hell. We’re not just talking about run-of-the-mill laziness, paranoia, or intrusiveness here. We’re talking about epic badness. Because there’s a very significant difference between a landlord who is just a pain in the neck and one who is trying to get you to leave by, say, soaking your possessions in ammonia and turning off the heat during winter. Right? So before you start complaining, here’s a fresh perspective on just how terrible your property owner can really be.

The landlord with a long list of crazy rules

After apartment hunting in London in 2013, Laura Evelyn visited a shared apartment whose landlord gave her some “light reading”—a list of 31 house rules she’d have to adhere to (and memorize!) if she chose to stay. Among them:

Perhaps needless to say, she decided to not live there—and turned the house rules into comic fodder for others.

The landlord so bad, he inspired art

Landlord Orazio Petito‘s three buildings in Sunset Park, NY, had racked up 684 housing violations by August 2012—so many, in fact, that the tenants not only unanimously stopped paying rent, but they also created an “art show” showcasing the squalor they had to live in. The photos, featured in a nearby home turned gallery, revealed piles of garbage, cracked windows and floors, moldy walls, rickety fire escapes, and worse.

“Not even animals live like this. We live worse than pigs,” resident Sara Lopez told the Daily News. Although the buildings were taken from Petito and put into receivership, as of February 2015 the conditions had not markedly improved.

The landlord who tried to disqualify current tenants

In April 2014, tenants at 312 Fillmore St. in San Francisco received a note under their doors from landlord Robert Shelton announcing that no matter how they qualified to move in, he was raising the bar: All renters would have to make at least $100,000 a year and have a 725 FICO score. The note didn’t say what the consequences would be if they didn’t, but it sure sounds like he was trying to flush out poor people from rent-controlled units.

When journalists from the local ABC affiliate called for clarification, Shelton hung up on them; when they dropped by, he slammed the door in their face.

Yet once news spread about Shelton’s new rental requirements—which many experts labeled illegal—Shelton turned over a new leaf. He left a new note under his tenants’ doors, which stated, “After reflection and guidance, I hereby rescind the April 25, 2014 correspondence to you. … The information contained was flawed.” Um, was that an apology, Shelton? Hard to say.

The landlord who pooh-poohed lead paint

After buying a 14-unit building in Crown Heights, NY, in 2012, Daniel Melamed allegedly shut off the heat during the winter, destroyed communal spaces, then, for good measure, refused to clean up flaking lead paint that formed clouds of toxic dust throughout the halls.

According to the New York Daily News, one tenant said the dust clouds were so thick, she covered her 6-year-old’s mouth and nose with a wet cloth every time they left their apartment. In total, the building racked up 251 housing code violations, and eventually Melamed was indicted on charges of unlawful eviction, child endangerment, and other crimes.

Meanwhile one unhappy camper there scrawled an epithet to the landlord in black paint on a plywood door, calling Melamed “a slumlord and pig.” Who are we to disagree?

The landlord who removed doors and windows

According to CBS Boston, this was what landlord Uwa Lawrence did to one apartment occupied by Donna Bey (who promptly left). And this was hardly an isolated incident.

Since 2011, Lawrence has been hauled into housing court 38 times; as for why he refused to repair the properties, he claimed his “architect” was away on vacation. The judge didn’t buy that and has begun proceedings to confiscate his properties and give them to a landlord who allows tenants to keep their doors and windows, among other things.

The landlords who terrorized tenants with the works

Like other landlords on this list, Kip and Nicole Macy thought they had a brilliant idea to cash in on the up-and-coming real estate market in San Francisco: Buy an occupied four-unit apartment building and force the tenants to move out. According to ABC News’ “20/20,” the contemptuous couple terrorized their tenants from September 2005 to December 2007 by engaging in the following:

All of that—and more—got them arrested in 2008 and sentenced to four years in prison—where we hope they enjoyed a small taste of the deprival of privacy and basic human rights they dished out to their tenants.