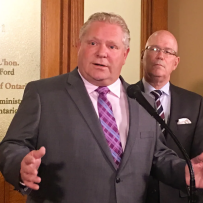 The soaring price of housing in Ontario is poised to become the next big pre-election issue for Premier Doug Ford and his Progressive Conservatives.

The polling firm that provides research for the PC caucus is surveying Ontario voters for their views on a range of policies related to the cost of buying or renting a home. The polling could be a sign that the PCs are feeling out whether promises to make housing more affordable can boost Ford’s campaign for re-election next June.

It comes as home sale prices in the province are in the midst of a second straight year of double-digit annual increases, even beyond the Greater Toronto Area.

CBC News obtained a copy of questions in an online poll being conducted by the firm Campaign Research, pollster to the PCs, in which housing affordability questions feature prominently.

The poll asks respondents to describe the affordability of owning or renting a home and the importance of housing affordability as an issue.

It also asks respondents to pick “the main reason that housing is unaffordable” from a list, and asks what the government should do to make housing more affordable. The options include:

The presence of these options in a poll does not necessarily mean the PCs will put any of them into action.

However, when CBC News asked Ford last week what his government will do to make it easier for people to afford buying a home, he replied by talking solely about the logjam in getting building permits.

“We’re going to sit down with the municipalities and see how the province can help them give them the tools that they need to speed it up,” said Ford, speaking at an unrelated news conference in Caledon last Wednesday.

The polling also asks respondents for their views on such questions as: should the government override local planning to fast-track the building of new homes? Are fees and commissions for real estate agents too high? Should people with a criminal record be allowed to purchase a home?

Nick Kouvalis, principal at Campaign Research Inc., declined to comment on the housing affordability questions and would not confirm or deny that the poll was conducted for the PC caucus.

But beyond the poll, there’s another sign that the cost of housing is on the radar for Ford and his party: the government announced earlier this month that it’s creating a task force on housing affordability.

The task force’s mandate will be to provide recommendations “to make housing more affordable for Ontario families,” according to the announcement in the fall economic statement mini-budget this month.

In the 2018 election campaign, Ford’s PCs promised measures to make housing more affordable. Three-and-a-half years into its term, the government’s actions have focused almost exclusively on measures to increase the supply of new housing.

The measures appear to be having an effect on new home construction starts, if not on the price of buying a home.

So far this year, new home construction starts in Ontario are up 16 per cent over the equivalent period last year, even though 2020 saw more starts than any year for a decade.

New homes form only a portion of Ontario’s residential real estate market. Construction began on 73,838 new homes in the province last year, while there were more than 228,000 home sales, according to the Canadian Real Estate Association (CREA).

But since Ford’s government took office, home prices in this province have just kept soaring.

In 2020, the average sale price of homes in Ontario exceeded $706,000, a 16 per cent increase over the previous year. Sales figures so far in 2021 have CREA projecting another annual price increase of nearly 22 per cent over last year.

The most recent monthly report from the Toronto Region Real Estate Board shows the average selling price for all homes in October was up 19.3 per cent over the same month last year.

The poll asks respondents several questions on the land transfer tax, including whether the government should exempt first-time home buyers from paying it, or get rid of it altogether.