CONTROVERSIAL PINE DRIVE APARTMENTS ONE STEP CLOSER TO BEING BUILT 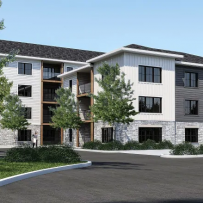 Rezoning for a controversial 41-unit apartment building in Charlottetown, one with eight years of history, passed second reading in city council on Monday after an attempt to defer the decision was rejected.

Coun. Mitchell Tweel attempted to defer second reading to give neighbours and the developer a chance to reach a compromise. Mayor Philip Brown rejected the deferral.

The area is largely single-family dwellings, and residents wanted to keep it that way, said Tweel.

The motion was already deferred once so the opposing sides could meet regarding the current proposal, but a meeting never took place.

Planning board chair Coun. Greg Rivard said he believes Tweel had good intentions with his intervention.

But he did question how a deferral would even take place this far into the process, as the second reading is normally just a formality.

After much discussion surrounding if a deferral was even allowed, Mayor Philip Brown vetoed the request without a vote.

The proposal to rezone 9 Pine Dr. in order to match with 11-13 Pine Dr. has “plagued the city and the previous councils for a while,” said Rivard

“This was a very difficult application to vote on … I was 50/50 on this the whole way through.”

The first proposal for apartments at 9 Pine Drive was in 2012. That 27-unit complex was rejected by council in 2016. The current proposal includes more property, underground parking, and a building set back further from the street.

Now that the second reading is complete, anyone can launch an appeal.

Council also voted in favour of allowing a 10-unit apartment building that would include two units of affordable housing at 385 Queen Street.

Rivard said the application was for a minor variance, only about 1.4 metres.

“If they decided to shrink the building by 4 and a half feet in some way, they would have had a right to build that unit without even coming to city council” said  Rivard.

Tweel opposed the project, and said it’s about more than the extra space.

“We have people who’ve lived in that community for a long, long time,” said Tweel.

“The people are not supporting that.”

According to Tweel, some neighbours are upset about the traffic that will be added to Costello Lane, a narrow street leading to a children’s park.

“Priorities seem to go to the developers and residents come last,” said Tweel.

“Where’s the logic and rationale in that?”

Rivard said it’s about addressing the housing concerns in the city and to do that, the key is to continue building.

“The higher the vacancy rate, the better the market price becomes,” he said.

“It’s tricky but certainly very important for the city of Charlottetown.”

Tweel said he is questioning whether the city does have a housing problem and wants proof that the large complexes are necessary.