Construction to commence in Fort Mac; rental market to surge 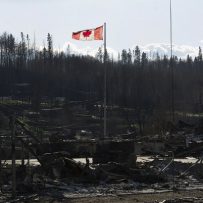 CMHC has released a report on Fort McMurray’s housing market, following the wildlfires that devastated a large swath of it earlier this year.

“Experience from previous natural disasters in Alberta suggests that many of the destroyed structures will be rebuilt. Fort McMurray will likely be no exception,” Tim Gensey, market analyst at Canada Mortgage and Housing Corporation, said in a release. “Expect increased construction activity in the new home market and declining vacancy rates in Fort McMurray’s rental market over the near to medium term.”

According to the report, it’s too soon to tell how home prices will be impacted. Two opposing factors – buyer interest and reduced inventory, which will help spur prices, and low oil prices, which will moderate them – make it difficult to provide an accurate prediction.

The CMHC also said that construction will begin this year for many of the destroyed homes. However, many others will require cleanup prior to rebuilding, which could be delayed by a year.

“If all homes that were destroyed have their replacements started in one year, it could be a record number of new starts and rebuilding activity for the city,” the Crown Corporation said.

During construction, the city is expected to experience a rental boom.

“Vacancy rates in the purpose built rental markets in Fort McMurray are expected to decline rapidly from the vacancy rate of 29 per cent in October 2015,” CMHC said. “This will help stabilize rents which have been declining.”