CONSTRUCTION TO BEGIN THIS SUMMER ON $30-MILLION, EIGHT-STOREY APARTMENT BUILDING ON CHARLOTTETOWN WATERFRONT 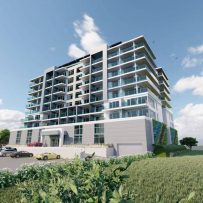 Construction on a new $30-million, eight-storey apartment building on the Charlottetown waterfront is expected to begin this summer.

The city and Pan American Properties signed a development agreement over the winter for a 99-unit complex that will be located on a vacant lot behind Renaissance Place (the former Sacred Heart Home) on Haviland Street, between the Queen Charlotte Armouries and the culinary institute.

Coun. Greg Rivard, chairman of the planning and heritage committee, said the bylaw for the waterfront zone, developed by Ekistics Planning in 2012, allows for this type of development as-of-right, meaning the project is not required to go to a public meeting first.

“Any big project like that is always contentious with the public, so I always say that there are developer rights versus public opinion and whatever is in the middle is usually lost in translation,’’ Rivard said, adding that the project didn’t require any height variances or rear or side-yard setbacks.

All the process had to go through was design review, which is basically just a process designed to make sure that a building fits in with the surrounding neighbourhood.

“The waterfront zone allows for this type of use,’’ Rivard said, adding that Pan American Properties was able to tap into a bonus density clause because the project will include two levels of parking.

The maximum height allowed in the waterfront zone is 106 feet and that’s exactly what this project will be, the planning chairman added.

Tim Banks, who owns Pan American Properties, said they have a development permit and are about 85 per cent done with their drawings.

“We’ve got the project budgeted, and it’s basically ready to go into the ground,’’ Banks said. “It’s a pretty traditional waterfront building that you see in many of your cities in eastern Canada.’’

With a panoramic view of the Charlottetown harbour, Banks said it should be one of the premiere properties in the city.

Banks said the building will be energy-efficient and feature dual high-speed elevators, a gym, a gathering area, art gallery, a dog wash, bike racks and a bike storage area.

As for rent, Banks said prices will be consistent with other waterfront properties, such as Paoli’s Wharf Condominiums. According to documents obtained by The Guardian, five per cent of the units will be “affordable housing’’.

And, Banks added, this project will help with the city’s low vacancy rate.

“Like anything else that’s put on the market place, it opens up vacancy to make vacancy higher, reduces rent and makes things more competitive. Next year, I think the story will be how high the vacancy (rate) is.’’

Banks expects to begin construction between mid-July and Aug. 1 and take 20 to 24 months to complete.