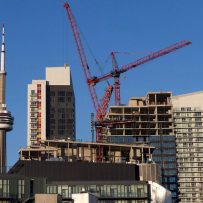 Nearly half of all investors who bought condominiums completed in the Toronto area last year aren’t making enough rent to cover their holding costs, despite chalking up exceptional gains on the value of their properties, a new study finds.

No less than 44 per cent of investors who took possession of new units in 2017 were in negative cash flow — that is their rental income fell short of the amount needed to cover their mortgage payments and condominium fees, according to the study by CIBC and Urbanation, a market analysis firm.

“We know now that many of them are in negative cash flow, but they also made very nice money on their investment,” said Benjamin Tal, deputy chief economist at CIBC World Markets Inc. “The question is will they begin to sell?”

Investors who bought condominiums for the purpose of renting accounted for 48 per cent of all newly completed units in the Greater Toronto Area in 2017. The resale price of those units – most of which were bought between 2011 and 2013, before the market boomed – was an average $817 per square foot in 2017, up 51 per cent from their average pre-sale price of $541 per square foot. An average of five years elapsed between when the units were pre-sold — or purchased from the developer ahead of construction — and when they were completed.

Assuming a down payment of 20 per cent or $75,000 — the average paid out — these investors realized a return of 155 per cent before closing costs, the study found.

“The return is stronger than it has been historically and that’s largely due to the price increases we saw over the last couple of years,” said Shaun Hildebrand, Urbanation’s senior vice-president. “But when you peel back all the layers you find some weak spots.”

Indeed, investors also paid higher rates on their mortgages, with 30 per cent of those studied paying an interest rate that is greater than 6 per cent and 16 per cent of investors paying more than 9 per cent.

“It is these investors who are up against rising interest rates and now rent controls that create some vulnerabilities for the market,” said Hildebrand. “The risks seem to be contained at this point but the economics of investing is likely to become more challenging in the coming years.”

The current boom in condo prices — driven by tight supply and soaring demand — won’t last forever, he cautions. Roughly 60,000 new units are currently under construction in the GTA and 20,000 new units are expected to be completed annually between now and 2021.

But there could be a silver lining, should those in negative cash flow decide to list their properties. If all investors who are falling short by more than $500 a month opted to sell, the number of units entering the resale market would amount to just 3.4 per cent of the annual condominium supply in the city, Tal said.

“You might have less demand and more supply,” Tal said. “And that may only result in a healthy slowdown in the market.”