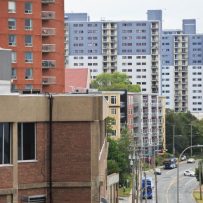 The group tasked with identifying solutions to Nova Scotia’s affordable housing crisis has recommended the government immediately spend at least $25 million to start to turn things around.

And if all of its recommendations are followed, the long-term outcome will be better than rental control, the group argued.

The Nova Scotia Affordable Housing Commission was struck in November, co-chaired by Ren Thomas, a Dalhousie University planning professor, and Eiryn Devereaux, deputy minister of the Department of Infrastructure and Housing, with members including other provincial and municipal government bureaucracies, non-profits, and developers.

The commission tabled its final report on Monday, titled “Charting a new course for affordable housing in Nova Scotia.”

“Nova Scotia is at crossroads. We need to chart a new course to meet today’s demand and plan for tomorrow,” the report said.

“Creating affordable housing options that meet diverse needs will require a significant financial commitment by all levels of government.”

With increasing population and low vacancy rates, the report said “wages have not kept up with increasing rents and more Nova Scotians are being forced to spend a greater proportion of their income on housing.”

Those quick actions include spending $20 million on mixed-income developments, funding for Rapid Housing Initiative projects, and rent supplements. Other quick actions include $2.5 million in spending in a “Community Housing Growth Fund” to build non-profit capacity, $2 million “to modernize the provincially-owned stock,” and $500,000 to help municipalities assess their housing needs.

The commission also recommended the creation of a new arm’s length provincial housing entity. It’s the commission’s first recommendation and referenced in several others. Housing Nova Scotia (HNS), the provincial agency responsible for delivering public housing, rent supplements, and funding for new affordable housing, is not currently independent from government.

“There was broad consensus from stakeholders across sectors that a new governance structure with an inclusive independent board of directors is a necessary condition for the provincial housing organization to focus on action and delivery, and set it up for greater success to advance the other recommendations,” the commission wrote.

“Currently, HNS is not structured to enable the recommendations we put forward. An arm’s length, independent entity is critical to meeting the challenges outlined in this Call to Action — a strong, stable governance board represented by key stakeholder groups, higher risk tolerance with improved risk management capacity and able to strengthen key partnerships, is essential going forward.”

It’s something Jim Graham, executive director of the Affordable Housing Association of Nova Scotia (AHANS) and a member of the commission, has long advocated for, as I reported in 2018:

Such an arrangement, Graham argues, would free the housing file from the influence of political interests. In a political environment, governments tend to spread the wealth around the province, reaching as much of the electorate as possible, without necessarily looking at where the need is greatest.

Graham wants to see Housing Nova Scotia work like a non-profit on a large scale: investing money in sustainable mixed-income projects in areas where there’s a need for more units, and then putting any money made back into maintenance and building more units.

The commission lists this recommendation as a short-term action, to be completed in fiscal 2021-2022, and recommends the government use the commission as an advisory committee in creating the new entity.

Under another of the commission’s recommendations, that newly independent housing authority would create a housing strategy for the next 10 years.

“As part of this work, develop strategies to better understand the specific housing needs and address the historic and systemic barriers faced by people of African descent and Indigenous communities to accessing affordable housing,” the commission recommended.

The new entity would also transform public housing by creating “a business-like approach focused on sustainable long-term management of assets and expansion.” That would include a review of the rent-geared-to-income model used for public housing, because as the commission noted, “Under this model, rental revenues are too low to cover operating costs, which have increased over time, and as tenant needs become more complex.”

At the same time it struck the commission, the government also introduced measures including temporary rent control, capping increases to 2% until February 2022 or the expiration of the COVID-19 state of emergency, whichever comes first.

The commission recommended those measures, which also include a ban on renovictions, be discontinued as planned.

“While some see rent control as an anti-poverty safeguard against displacement, gentrification, and economic evictions, we need to carefully consider all its potential effects,” the commission wrote.

“Opponents are concerned rent control can suffocate supply and divert investment away from residential rental units, leading to deterioration. When rental rates do not keep pace with the cost of maintenance, building operations, and renovations, this disincentivizes housing providers to preserve existing affordable units.”

The commission agreed with the government’s use of rent control in the short term, but doesn’t think it should stay.

“For the long-term, we must identify the most effective measures for Nova Scotia to create and preserve affordable housing supply with as little distortionary impact on the housing market as possible,” the commission wrote.

“The Commission carefully examined recent research, practices in other jurisdictions, and stakeholder input, and we believe the implementation of our recommendations as a whole will result in better long-term outcomes for all.”

In lieu, the commission recommended the province, with municipalities, tenants, and landlords, “explore opportunities to support eviction prevention, provide temporary assistance to low-income households facing evictions due to planned renovations, improve access to legal aid services, and consider developing retention plans to prevent the loss of long-term renters that are at risk of being priced out of their neighbourhood.”

The government should review the Residential Tenancies Act, the commission recommended, “to examine opportunities to improve renter protection and strengthen landlord-tenant relations.

“This should include options to minimize the impact of evictions due to renovation on tenants and improve the overall efficiency of the application process and the administration of the program.”

The commission also recommended the province finally get out of municipalities’ way.

Under a recommendation titled, “Empower municipalities to become key partners in affordable housing,” the commission wrote that “the Province can grant local governments the authority they need — to eliminate or minimize municipal taxes, fees, or charges for affordable housing developments, including partnering with the private sector, if they so choose.”

The province should also “authorize municipalities to use inclusionary zoning in private development in lieu of bonus zoning charges, in combination with appropriate incentives to avoid any additional costs to the development,” the commission wrote.

Inclusionary zoning is the practice of requiring affordable housing in private development. It’s something Halifax Regional Municipality has been asking for permission to do since 2017, and the province has repeatedly turned it down. A 2016 report to council said the policy could create 180-250 affordable units annually — and that was arguably before the current boom in construction had really begun.

Another recommendation called on the province to “review and amend the pertinent provincial legislation and regulations necessary to implement the Commission’s recommendations.”

“Municipalities and other stakeholders have shared with us the unintended consequences of many provincial laws and regulations, which need careful review,” the commission wrote.

“For example, current provincial legislation does not give municipalities the chance to partner with the private sector to offer a wider range of incentives, as in other provinces.”

To encourage the development of more affordable housing, the commission recommended the government reduce the costs of construction.

The commission also encouraged the province to work with the Property Valuation Services Corporation, the agency in charge of property tax assessments across Nova Scotia, “to consider creating a new assessment classification for affordable housing.”

As reported in the Halifax Examiner by Yvette d’Entremont, a Canadian Centre for Policy Alternatives-Nova Scotia report released last week called for the creation of 30,000 permanent affordable housing units with capital spending of more than $500 million.

This report didn’t get into those specifics, but the commission had a reason.

“This report … fails to identify clear targets for the generation of new affordable rental units,” the commission wrote.

“To our disappointment, it became clear that the Province does not collect enough data at the community level to inform the level of supply needed to address current and future demand, a clear gap we highlight in this report.”

Especially outside of HRM, which is covered annually with the Canada Mortgage and Housing Corporation’s rental market survey, the shortfall of rental supply is hard to quantify.

To solve these issues, the commission recommended four actions:

The commission said it would be up to the government to get into the detailed costing of all the recommendations.

“Due to the limited time we had to complete our review and develop our recommendations, we felt this financial exercise would be best undertaken by government itself,” the commission wrote. “At minimum, we have proposed an immediate investment of at least $25 million to undertake what we consider quick starts with the recognition that the Province has already tabled a budget for fiscal year 2021/22.”

Geoff MacLellan, Minister of Infrastructure and Housing, addressed the report in a videoconference with reporters on Monday, but said he didn’t get the document until it was made public a few hours previous.

MacLellan wouldn’t commit to any individual recommendations, telling reporters he would take them to Premier Iain Rankin and the rest of cabinet, but he said he’d be advocating for the $25 million in short-term spending.

“I can tell you that the premier recognizes the need and recognizes the value in following the framework of the commission so I’m certainly going to make that pitch,” he said.

“I think that when you look at this suggestion it very much is a trigger for a number of the other recommendations and it makes perfect sense to me,” MacLellan said. “I’m going to follow the process properly and take this to cabinet and treasury board, but from my own perspective, this makes perfect sense.”

MacLellan said he believes the people within Housing Nova Scotia believe in improving the housing situation, but the structure of the department has held them back.

“We’ve got staff who have a number of ideas who would love to bring them forward but just the really the platform for them to do so doesn’t really exist now,” MacLellan said.

Asked what happened to get to this place, MacLellan said he thinks “the mechanisms in place became very static.”

“We have a public housing system, a model that’s 60 years old, that hasn’t been changed or altered in six decades,” he said.

The opposition NDP laid the blame at the Liberals’ feet.

In a news release, the party said the report “highlights the Liberal government’s failure to deal with skyrocketing rents and housing prices leaving thousands of families struggling to find an affordable place to live.”

Also on Monday, the province announced $6.4 million in spending to create supportive housing in Halifax and the Annapolis Valley. In Halifax, AHANS will receive $3.5 million to buy housing “for people with the highest needs who might otherwise remain homeless.” In the Valley, the Portal Youth Outreach Association will get $1.1 million for new transitional housing for young people experiencing homelessness. The other $1.8 million will cover operating costs.