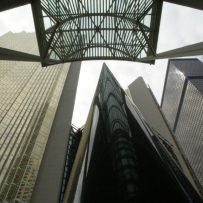 Canada was one of four countries to set back-to-back records for commercial real estate investment last year, according to CBRE.

Commercial property deals in Canada reached a record for a second consecutive year and show no signs of slowing as investors continue seeking high-yield assets in a haven from global turmoil, according to CBRE Group Inc.

Transactions last year totalled about $43 billion, up from 2016’s record of $34.7 billion, the real estate services firm said in a statement. Historically strong fundamentals, such as high rents and low vacancies, are likely to improve even further, pointing to potentially even higher investment in 2018, according to CBRE.

“Despite the relatively late stage in the cycle, investors are not shying away from Canadian commercial real estate,” Paul Morassutti, executive managing director for CBRE Canada, said in the statement. “We have record-low vacancy rates, record-low unemployment, increasing institutional allocation to real estate and supportive immigration that fuels population growth.”

Buyers are seeking to cash in on frenzied demand in Canada for properties from offices to warehouses, while the country’s growing economy and political stability give it a reputation as a safe place to invest. Building values are also rising as tenants fight for room to expand, resulting in higher rents. CBRE sees the technology industry — already a key driver of the office market, particularly in Vancouver and Toronto — soaking up an even greater share of space in the future.

Canada was one of just four countries to set back-to-back records for commercial real estate investment last year, the others being China, Spain and the Netherlands, according to the firm. Foreign investors last year accounted for 13 per cent of all deals above $10 million. That was second to the peak of 27 per cent set in 2016, a year with such blockbuster deals as the sale of Bentall Centre in Vancouver to China’s Anbang Insurance Group Co.

Potential risks for investors in the coming year include rising interest rates and negotiations over the North American Free Trade Agreement. A slowdown in Canadian imports and exports may hurt several sectors, especially the industrial market, according to CBRE.

Housing instability in Toronto and Vancouver could also cause problems, Morassutti said. Toronto’s once-hot housing market is cooling amid stricter lending regulations, and Vancouver just announced a new levy that makes it tougher for foreigners and speculators to buy real estate.

“The housing market is really the engine behind Canadian growth over the last decade,” Morassutti said in an interview. “Look at consumer household spending and the wealth effect of having your house price go up every year. If that were to really falter, and given the fact that many Canadians are levered right up to the hilt, that could have real dire consequences for the country.”