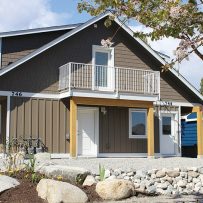 Three families will be moving into a small-scale affordable rental housing development in Gibsons over the weekend, marking the first “mixed-income model” housing project on the Sunshine Coast.

The three-unit development, located on Franklin Road, is a pilot project developed with BC Housing “to test smaller housing projects that can easily fit into existing neighbourhoods with minimal impact,” according to a release by the Affordable Housing Society, which oversaw the project.

The development was built on an unserviced lot provided by the Town of Gibsons via long-term lease, with $1.4 million in funding committed by BC Housing.

Society president Mike Alsop said the organization is “confident” the project will be “significantly lower” than the budgeted amount. The final figure will be released by BC Housing in June.

The majority of the funds will be paid back as a mortgage, held by the society, according to the release.

Under a mixed-income model, some units are rented at market rate and others below market, which is intended to make the project sustainable and self-funding, and according to the society is “almost universally accepted as a better model to the previous ‘project’ style of housing which would often create divides in a community based on income.”

One unit, a laneway house on the property, will be rented at a market rate set by BC Housing.

“Through this model, we’re able to make affordable housing possible in our community, with minimal cost to the taxpayer,” said Alsop.

Affordable Housing Society administrator Chris Neumeyer said many people applied to rent the units, and the group has established a wait list.

Application eligibility was reviewed by a subcommittee of the board, followed by interviews with applicants, conducted by the group’s hired property management company.

“This was done in order to ensure that selection was confidential and neutral,” said Neumeyer.

Powell River-Sunshine Coast MLA Nicholas Simons called the collaboration between the town, society and BC Housing “inspiring,” while West Vancouver-Sunshine Coast-Sea to Sky Country MP Patrick Weiler called the project an example of “what is possible when government, the non-profit sector, and community partners work together to find creative solutions to housing affordability challenges.”

Gibsons Mayor Bill Beamish said the town is “grateful” for the society’s “ongoing work in advancing on-the-ground solutions to the crisis.”

A much larger, 40-unit project slated for Shaw Road and supported by the Town of Gibsons, has been delayed after the society was denied funding by BC Housing and Canadian Mortgage and Housing last year.

In February, the group said it had reapplied and construction was anticipated to begin in the spring. However in March, BC Housing announced funding decisions would be delayed until late May due to the number of applications it had received, according to Neumeyer.

“We are optimistic that it will happen, as this project has the support of the community and local government,” he said.