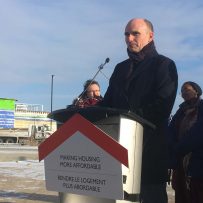 A federal housing agency hopes to see every Canadian with an affordable home by 2030 with a plan that lays out a path of experimentation to make it happen.

The Canada Mortgage and Housing Corporation says today that meeting that 2030 target will take help from governments and the economy — hence the aspirational nature of the goal.

An estimated 1.6 million households are considered in “core housing need,” meaning that people live in places that are too expensive for them or that don’t meet their needs.

The plan says hitting the mark will also require removing barriers to housing based on gender, race, sexual orientation and gender identity.

The target is one that the corporation had talked about with stakeholders for months as it took the lead on delivering most of the money in the federal government’s 10-year, $40-billion housing strategy.

Over the next year, the agency plans to dole out some $2.4 billion in loans and funding as part of the strategy and to build 8,300 units and repair 15,000 more by this time next year.