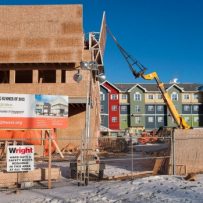 Canada Mortgage and Housing Corp. says significant regional differences in home construction will be apparent over the coming years, with slower activity in most areas dragging down overall construction in 2016 and 2017.

The Ottawa-based agency is estimating that between 181,300 and 192,300 housing units will be started this year.

CMHC says slower activity in oil-producing provinces such as Alberta will be partly offset by increased activity in British Columbia and Ontario.Both ranges have been lowered from CMHC’s previous outlook released late last year.

The Crown corporation also says there will be a decline in the number of previously owned homes that are resold in 2017 from this year but the average price is expected to increase over the same period to as high as $501,100 in 2017.