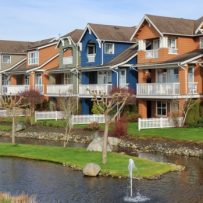 Canada Mortgage & Housing Corp., the crown corporation that backstops mortgages and tracks new housing data, has been in contact with at least eight government agencies to find data on offshore buyers in Vancouver, Toronto and Montreal as prices continue to soar, according to 486 pages of e-mails, briefing notes, and other documents Bloomberg News obtained through a freedom of information request.

“At this time, no existing tool can provide a definitive measure of the level of foreign investment in Canada’s housing markets,” Karine LeBlanc, an agency spokeswoman, said in an e- mail Friday. “That said, CMHC regularly engages in discussions internally, as well as with industry experts, as part of its continued efforts to develop a program of work that would better capture data on foreign buyers.”

The push for data comes amid concerns that foreign money is boosting prices, making housing unaffordable for locals and putting it at risk of a crash if the funds pull out quickly. Politicians have been under pressure from many quarters, including Vancouver Mayor Gregor Robertson and HSBC Holdings Plc to get a better handle on the numbers and consider measures to cool the inflow.

CMHC President Evan Siddall said in November that data collection on foreign investment was one of his priorities. “Accurate and reliable” figures, not just anecdotes, would help the agency gauge risk and instability, he said at the time.

Since then, prices have continued to accelerate, with the benchmark price of a detached home in Vancouver rising 27 percent to $1.3 million ($980,000) in February from the same month a year ago. Toronto average prices have hit $1.21 million, and Montreal continues to draw oversees buyers.

A core team of analysts at CMHC held several meetings to discuss how best to tackle the data gap. Researchers had initial meetings with agencies including the Canada Revenue Agency and Fintrac, CMHC confirmed. The Financial Transactions and Reports Analysis Centre of Canada monitors money laundering and out-of- country transactions of at least $10,000. The documents show CMHC also planned or had meetings with the Bank of Canada, British Columbia’s housing and property assessment agencies, and the department of finance to start a data working group.

Throughout their internal meetings, the Ottawa-based agency laboured on the definition of a foreign investor. At one point, CMHC researchers considered delving into drivers-licence data to determine whether a home buyer was a foreigner, as visitors and temporary citizens can apply for a license in Ontario. CMHC is no longer considering this option, LeBlanc said. In the end, the agency opted for a definition similar to one used by global real estate consulting firm Knight Frank LLP, according to LeBlanc.

“CMHC will measure the level of foreign investment by determining if the property is owned by a person whose permanent residence is outside of Canada,” she said.

That review includes international students, some of whom live in million-dollar homes near the University of British Columbia campus in Vancouver.

“Anecdotal evidence indicates that many properties in the Vancouver area are bought by foreign students (and their families) to live in while they go to school,” LeBlanc said in the e-mail Friday. “Foreign students are only temporary residents of Canada, and therefore would be counted as non- permanent residents of Canada.” Canadians whose primary residence is outside the country but make money off real estate in Canada may also be classified as foreign buyers, meeting minutes show.

The documents show CMHC worked with Statistics Canada and Citizenship and Immigration Canada to find that fewer than 18 percent of international students in 2014 stayed to participate in a program that would make them eligible for citizenship.

CMHC is taking concrete steps this year. It’s expanding the housing starts and completions survey to ask developers in Toronto, Vancouver, and Montreal to estimate the number of purchases by non-Canadians. CMHC is holding meetings with builders this year to discuss this and will compile the data at the end of the year, LeBlanc said.

The agency is also working with real estate boards in those cities to discuss the best way of collecting data at the time of sale, and will gauge whether to proceed with this route in the third quarter, she said. CMHC was also considering a survey of Vancouver realtors this year.

The agency has also started discussions with provincial land registries and assessment companies, including JLR Land Title Solutions Inc., Municipal Property Assessment Corp., and Landcor Data Corp., to see if CMHC could pull and compare property and mailing addresses. If someone’s mailing address is different than their registered home address, it might indicate an investment property. If their mailing address is outside the country or a lawyer’s office, it could point to a foreign buyer. CMHC has asked the provinces for the same data.

After meetings with realtors, lawyers and condo developers in Vancouver, CMHC market analysts pointed to the lack of transparency in the market. Realtors often don’t see residency status or identification such as a passport, and that information isn’t stored electronically at the brokerage. Lawyers and bankers who run the transaction aren’t obligated to pass on residency information and buyers don’t regularly check a citizenship box when paying land-transfer tax.

“Conveyance is done through the lawyers and bankers,” minutes from a meeting show. “Money transfers should get passed onto Fintrac. Whether this is taking place or not is an issue.”

Previously, CMHC has tried to glean the scope of foreign investment with a survey of property managers that found less than 6 percent of condos were bought by people who reside outside the country.